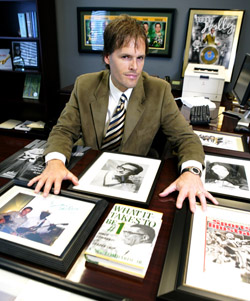 Few people know more than Indiana attorney Jonathan Faber about the actual worth of being famous these days. He’s certainly been committed to the field work.

He’s played guitar in the living room of rock ’n’ roll legend Chuck Berry, dodged paparazzi to meet with representatives of Princess Diana’s estate, and given a presentation to an audience of four-star generals after the U.S. military received an inquiry about putting the image of Gen. George S. Patton in a commercial.

Faber, whose office is in Shelbyville, outside of Indianapolis, has been involved in making licensing deals on behalf of celebrity clients and their estates that have paved the way to many of the most memorable advertisements in recent years.

He did the licensing work that led to a Lipton Iced Tea commercial featuring an animated Reggie Jackson, a Johns Hopkins spot with a reanimated Ella Fitzgerald (through existing footage and digital alteration) performing with a modern-day jazz band, and a Chevrolet Silverado commercial featuring Rosa Parks.

He has also stepped in when celebrity images are used without permission. Faber used to send out a legal warning when someone used images of Marilyn Monroe or James Dean without the permission of their estates. On occasion, he’s also asked to testify as an expert witness in cases where a defendant, usually a company, has used a celebrity in some manner—often in a promotional campaign—and the plaintiff is attempting to collect damages. Faber will give the jury a dollar figure.

“I can’t deny that I sometimes get excited when I see news of significant damages” in a publicity rights dispute, he says. “It buttresses the fact that there’s lot of value in a celebrity name and adds gravity to what I do.”

Publicity rights battles are growing exponentially, according to legal practitioners, who point to a host of reasons for the increase. For one, about 18 states have adopted laws giving individuals the right to sue over commercial exploitation of their persona. In addition, changes in technological culture make it both more tempting to use—and easier than ever to spot—an unauthorized use of a celebrity’s image.

Most especially, practitioners believe this area has grown hot because of a lack of acknowledged boundaries. A combination of generous laws, ambitious plaintiffs and no consistent bright-line defenses against claims means that attorneys are free to take rights conferred, find jurisdictions where the protections are most generous, and make a claim.

Some critics worry about how expanding publicity rights may chill free speech, but in the meantime, the issue of celebrity publicity rights is giving a lot of work to a new generation of IP lawyers like Faber.

Continue reading “What’s in a Name?” in the November ABA Journal.