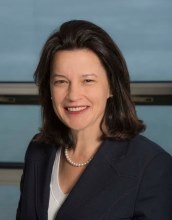 On Monday, a Manhattan jury handed down a split verdict in a retrial of two former Dewey & LeBoeuf executives accused of securities fraud and conspiracy in the run-up to the firm’s collapse in 2012. The jury acquitted former executive director Stephen DiCarmine while convicting chief financial officer Joel Sanders. On Tuesday, DiCarmine’s defense attorney, Rita Glavin of Seward & Kissel, took part in a Q&A with ABA Journal about the just-concluded trial.

Question: What did you learn from the first trial, and how did it impact the second trial? [Glavin was not involved with the first trial—she was hired to represent DiCarmine in May 2016.]

I think we learned a lot by studying the transcripts and evidence from the first trial. For one thing, it was harder to surprise us, although the prosecution were still able to, at times. I think the prosecution’s decision to streamline the charges and their case also helped us. We really focused on trying to tell the jury about who Stephen DiCarmine was, what his job was, and what it was that he did, and did not, do. We also spent a lot of time on cross-examination and were able to use a lot of the prosecution’s own witnesses against them.

Question: Were there any pivotal moments from the just-concluded trial that you’d point to?

I think the most important moments in the trial came from the prosecution’s cooperating witnesses—especially Frank Canellas [Dewey’s ex-finance director, who pleaded guilty to grand larceny but was allowed to renegotiate his plea in October to a lesser charge while cutting his sentence recommendation]. Frank made it clear that he never discussed the adjustments at issue with Steve, and that Steve never asked him to make any improper adjustments. Also, another cooperating witness, Diane Cascino, reaffirmed that she never discussed the adjustments at issue with Steve and never gave him a reason to believe she was dishonest. Those key pieces of testimony were very important for us during the trial. Overall, not a single witness testified that Steve did something wrong or told someone to do something wrong.

Question: Was it difficult to overcome the notion that, as the leader of the firm, the buck stopped with him and he should have known what was going on?

I don’t think that was difficult to overcome because he was not the boss. We were able to get testimony from two people on the executive committee who testified that he was not totally in charge. There were three day-to-day managers that reported directly to Steven Davis [ex-Dewey chair who was one of the four defendants in the first criminal trial—Davis entered into a deferred prosecution agreement in January 2016] and not to Stephen DiCarmine. We were able to establish that he did not oversee the finance and accounting department, and had little to do with banks and private placements. We were very affirmative with what he was, and was not, dating back to his tenure at LeBoeuf Lamb.

Question: You said that you were able to use a lot of the prosecution’s witnesses against them. Why do think that was? Do you think they sympathized with their former colleague and maybe thought he was getting a raw deal?

I don’t think sympathy played a part. Some of the prosecution witnesses that, we think, became our witnesses had nothing to do with Steve. For instance, one was a JPMorgan employee who had never worked for Steve. I think the witnesses did their best to answer the questions. There were simply some undeniable facts that showed he was not involved in the accounting transactions at issue or would have had reason to think they was anything improper about the accounting.

Question: DiCarmine’s co-defendant, ex-Dewey chief financial officer Joel Sanders, was convicted of securities fraud, scheme to defraud and conspiracy. After the verdict, DiCarmine publicly said that he believed Sanders is innocent. What happened?

I’m not going to comment on Sanders—that’s probably a question for his attorney to handle [Sanders was represented in both trials by Andrew Frisch]. Nevertheless, a split verdict is unusual for large-scale white-collar criminal cases. It’s not something you see a lot.

Question: What has your client been doing these last few years? What is going to do now that he’s been acquitted? Is he going to get back into the legal industry?

I think his life has been on hold for the last few years, not knowing what would happen with these trials. In the meantime, he’s been taking time to help children in Florida by being a foster parent there. I think he’s going to take some time to let everything sink in before he figures out what he’ll do next. In the meantime, he’ll enjoy being home and spending time with his foster children now that this incredible weight has been lifted off of him.

Next:
Vermont Law receives $17 million loan from US Department of Agriculture