Was Trump's appointment of acting AG Whitaker within the law? 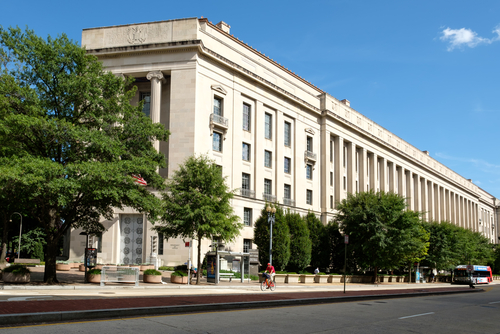 The Department of Justice. Image from Shutterstock.

Some in the legal community—both liberal and conservative—are questioning whether President Donald Trump acted within his constitutional authority by appointing Matthew Whitaker as acting attorney general after asking Jeff Sessions to resign.

The Wall Street Journal, Slate and Lawfare have stories about the dispute.

An op-ed in the New York Times last week, written by former solicitor general Neal Katyal and conservative lawyer George Conway, argues that Whitaker’s appointment is unconstitutional under the Appointments Clause of the Constitution, which requires that the president get the “advice and consent of the Senate” for appointments to offices that report directly to the president. The U.S. attorney general is a position that requires Senate confirmation, and Whitaker had not been through that process for his post as Sessions’ chief of staff. Senate Minority Leader Chuck Schumer, D-N.Y., expressed similar misgivings in a letter to the president last week, CNBC reports.

The president appointed Whitaker under the Federal Vacancies Reform Act, a 1998 federal law laying out rules for how a president may appoint temporary officers. Under that law, presidents may appoint a temporary officer to a Senate-confirmed, presidentially appointed position when the previous officeholder “dies, resigns or is otherwise unable to perform the functions and duties of the office.” The president may install any other person who has been confirmed by the Senate, or an “officer or employee” who has served at least 90 days at the agency at a senior pay scale.

Whitaker, as the former chief of staff, would fall under the second category. That’s unusual, critics note. Most acting federal officers are promoted from a position as deputy to the vacant office. The Vacancies Reform Act makes this the default succession, and the Justice Department’s succession law, 28 U.S.C. § 508 (2011), designates the deputy attorney general as the preferred acting attorney general. This would make Rod Rosenstein, who has been through a Senate confirmation, the presumptive successor to Sessions. On Tuesday, the state of Maryland made that argument in a motion challenging Whitaker’s appointment as illegal and unconstitutional.

“That the Senate voluntarily relinquished its advice-and-consent power in the FVRA does not make this end-run around the Appointments Clause constitutional,” Thomas wrote.

The Wall Street Journal notes that some critics of the president’s choice also argue that the provision of the Vacancies Reform Act at issue doesn’t apply to “principal officers” that report directly to the president.

As Lawfare and Slate note, there’s also a debate over whether the Justice Department’s succession statute should override the Vacancies Reform Act. John Bies, writing at Lawfare, notes that rules of statutory interpretation favor specific statutes over more general ones. However, the Justice Department itself, through its Office of Legal Counsel, has supported a deviation from the line of succession during President George W. Bush’s administration in 2007, when former Attorney General Alberto Gonzalez stepped down. In that case, Bush selected Peter Keisler, who had gone through the Senate confirmation process as the assistant attorney general of the Justice Department’s Civil Division. Keisler served less than two months as the acting attorney general before Michael Mukasey was confirmed as U.S. attorney general by the Senate.

On Wednesday, the Department of Justice released a new memo referencing the 2007 opinion and justifying Whitaker’s appointment as within the president’s powers.

Gonzalez himself weighed in on Whitaker’s appointment in an NPR interview on Saturday. “I’ve got some issues with this, quite frankly, because the notion that the chief of staff who is not Senate confirmed would have more experience, more wisdom and better judgement than someone like the deputy attorney general or even the solicitor general, people in the line of presidential succession within the Department of Justice, to me, it confounds me,” he told NPR.

Finally, some question whether the Vacancies Reform Act applies when the departing officer was fired. Sessions resigned, but said in his resignation letter that he was resigning at the president’s request, raising questions about whether that is effectively a firing. The Vacancies Reform Act says it applies when the officer “dies, resigns or is otherwise unable to perform the functions and duties of the office.” Attorney John Lewis of Democracy Forward and Elizabeth Hempowicz, director of public policy for the Project on Government Oversight, told the ABA Journal in October that there’s an active legal debate on this issue, with no court rulings and a pending case on the issue as applied to the Department of Veterans Affairs.

“What about a bad apple in a [presidentially appointed] job? If the person refuses to resign (and impeachment takes time) what would happen to the job’s duties if they were non-delegable and could not be performed, except by an acting (confirmations take time too)?” wrote O’Connell. She notes that there are issues with the Vacancies Reform Act that could be tweaked, “but don’t burn down a statute that makes modern government work because of [Trump].”

Updated on Nov. 15 to include the DOJ’s Wednesday memo and information about the Maryland suit.