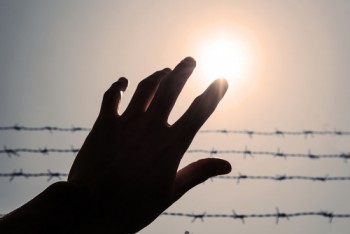 Record heatwaves with the ability to kill affect “hundreds of thousands of Americans who are serving time at prisons without air conditioning” according to a new documentary and reporting project from The Marshall Project and the Weather Channel.

While a national issue, the documentary focused on the state of Texas, which has the largest inmate population in the country and is experiencing hotter temperature extremes due to climate change.

In 2011, Texas registered its hottest year on record including a record for number of days above 100 degrees. During that summer, while temperatures were at 114, some correctional facilities recorded a heat index of 150 degrees. During a prolonged heatwave, 10 prisoners died to make up half of all state prisoner deaths since 1998, The Marshall Project reported. Eighty percent of Texas’ prison population is without air conditioning.

As temperatures climb, the elderly prisoner population, which is increasing due to harsher sentences that became popular during the 1980s and ’90s, are at greater risk for heatstroke. Furthermore, those prisoners on medication for high blood pressure and certain psychotropic drugs are at increased risk because the medications affect the body’s ability to cool itself. According to The Marshall Project’s reporting, about 21 percent of Texas prisoners are prescribed psychotropic drugs and nearly 19 percent are prescribed blood pressure medication.

The documentary shows footage from a state training video for corrections officers on how to diagnose and attend to a prisoner with heatstroke.

“These are third-world conditions,” says Lance Lowry, a prison guard and head of the state’s correctional officers’ union and an advocate for air conditioning in facilities. “We’re not trying to make it lush. We are trying to make it humane.”

However, the documentary showed that state lawmakers are uninterested or unwilling to spend the money on this endeavor. Meanwhile, the Texas prison system spent $750,000 on air conditioning for barns where pigs are raised to help feed prisoners. Official policy states the temperature in the barns cannot exceed 85 degrees.

Currently, the Texas Department of Criminal Justice faces wrongful death and class action lawsuits because the heat in their facilities.