Referencing Kavanaugh, Sotomayor says: 'We are going to let these times pass' 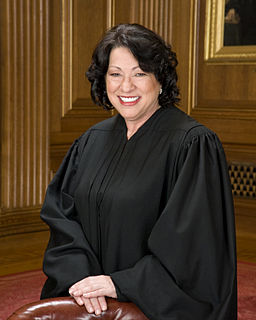 Justice Sonia Sotomayor told Univision this week that the U.S. Supreme Court has welcomed Justice Brett Kavanaugh, and, “We are going to let these times pass.”

Sotomayor said there is always a welcoming for new members of the Supreme Court, the National Law Journal reports, translating the Spanish language interview. “We need to work with him, and we are going start our new family and work together,” she said.

Sotomayor recalled her own experience when she joined the Supreme Court in 2009. “The expectation of others [was] that because I was Latina I lacked the intelligence to do this job,” she said. Many “have since changed their mind.”

At an appearance Thursday at Cornell University, Sotomayor said it was valuable to serve as a federal judge at the trial level before her elevation to the 2nd U.S. Circuit Court of Appeals at New York and the Supreme Court. The Cornell Daily Sun covered her remarks.

“I am the only judge—justice—who in every single opinion I write, I talk about the consequences of our ruling,” Sotomayor said. “And I really do think that that’s a product of having been on the trial court because there you have parties who appear directly before you. You see them as human beings.”

One law student asked Sotomayor for her advice to young female lawyers and law students during this “time of national reckoning,” when many women feel they are not being heard, according to coverage by the Cornell Chronicle.

“Anything you do in life requires hard work, and anything that’s worth getting requires even harder work, and you can’t take disappointment and despair and let it control you,” Sotomayor said. “We have only one option in this world, and that’s to keep on trying. People have died for our freedoms. How many civil rights leaders gave their lives so that we could have voices we have today? If they can give their lives, we can expend our energy in making their dream come true.”

Sotomayor is publicizing her new children’s book about her love of reading as a child. The book, available in English and Spanish, is Turning Pages: My Life Story, CBS Chicago reports.