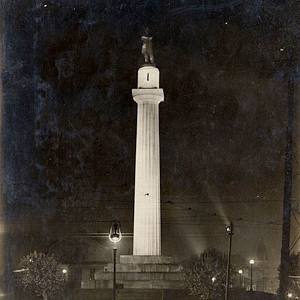 The suit (PDF) was filed hours after the city council voted 6-1 to remove the statues on Thursday, report CNN and the New Orleans Times-Picayune. The complaint cites alleged violation of federal and local laws, as well as the federal and Louisiana constitutions.

The suit claims removal of the monuments violates the plaintiffs’ First Amendment right to free expression, “which they exercise by maintaining and preserving the historic character and nature of the city of New Orleans, including their monuments.”

The plaintiffs also claim a violation of equal protection because they say they were treated differently than monument opponents. “The city’s effort to move the four monuments appears to have originated with the musician Wynton Marsalis, whose opinion has inexplicably been afforded more weight than that of the residents of New Orleans,” the suit says. “The defendants intentionally treated plaintiffs, and persons opposed to removal of the four monuments, differently from other similarly situated individuals, and there is no justification for the difference in treatment.”

The Democratic mayor of New Orleans, Mitch Landrieu, did credit the famous jazz musician in June for prompting him to ask the city council to reconsider which monuments to display, according to an earlier article in the Times-Picayune. Landrieu reportedly told a crowd that a 2014 conversation with Marsalis about the city’s tricentennial made him rethink his own attitude towards monuments which honor Confederate figures.

Marsalis was born and raised in New Orleans. He wrote an opinion piece for the Times-Picayune on Dec. 15 in favor of renaming Lee Circle and removing the statue of the general, in which he said: “When one surveys the accomplishments of our local heroes across time from Iberville and Bienville, to Andrew Jackson, from Mahalia Jackson, to Anne Rice and Fats Domino, from Wendell Pierce, to John Besh and Jonathan Batiste, what did Robert E. Lee do to merit his distinguished position? He fought for the enslavement of a people against our national army fighting for their freedom; killed more Americans than any opposing general in history; made no attempt to defend or protect this city; and even more absurdly, he never even set foot in Louisiana. In the heart of the most progressive and creative cultural city in America, why should we continue to commemorate this legacy?”

Marsalis suggested in his op-ed that the space in Lee Circle could instead be devoted to a monument celebrating the support the city received from the international community after Hurricane Katrina.

The plaintiffs–the Monumental Task Committee, the Louisiana Landmarks Society, the Foundation for Historical Louisiana and a chapter of the Sons of Confederate Veterans–also claim that removal of the monuments violates a Louisiana constitutional provision recognizing the right of the people to preserve, foster and promote their linguistic and cultural origins.

According to the Times-Picayune, another argument in the suit “reprises arguments in a lawsuit filed in the early 1990s and supported, among others, by avowed Ku Klux Klan member David Duke.” The argument: The U.S. Department of Transportation, which uses federal funds for streetcars, has to use the money in a way that preserves historic properties. The department should prevent the removal of the monuments until a required review can be conducted, the suit says.

The 1990s suit resulted in a court order preserving one of the monuments now at issue, according to the new suit.

A hearing on the plaintiff’s motion will be heard on Jan. 14, the Times Picayune reported in a follow-up article. Mayor Landrieu has agreed not to remove the monuments before that hearing.