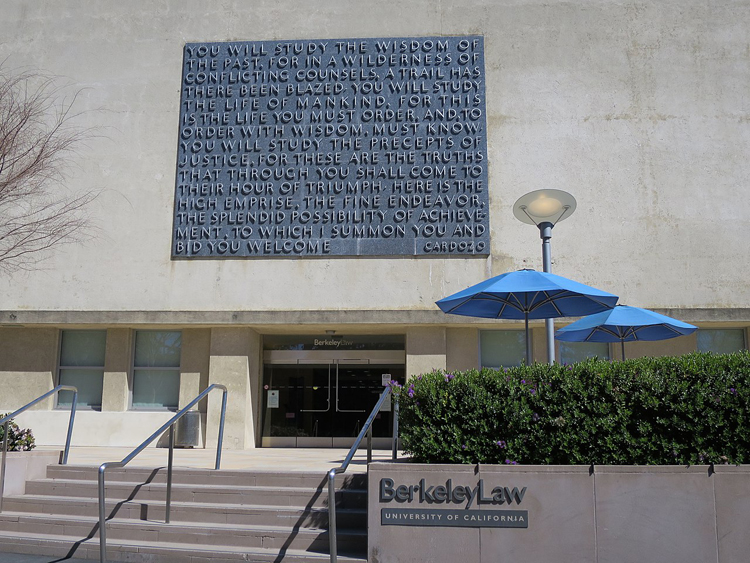 In light of racist views held by 19th-century mining industry baron John Henry Boalt, a University of California Berkeley law school committee has suggested removing his last name from a campus building, as well as in internal communications and casual namings.

A Nevada attorney who came to California in the 1880s, Boalt wrote a piece the previous decade titled “The Chinese Question,” which argued in favor of preventing immigration from China because “Caucasian and Mongolian races are non-assimilating races,” and the Chinese were seen as inferior to white Americans. In his writing, Boalt also expressed negative views about blacks and Native Americans, according to the committee report released Monday.

After John Boalt died, his widow, Elizabeth Boalt, donated two parcels of San Francisco land valued at $100,000 to the law school in 1906, with instructions that the property be sold and the proceeds go toward a new building for what was then known as the School of Jurisprudence. A week later, the San Francisco earthquake occurred, and the school could only sell one parcel of land, notes Charles Cannon, Berkeley Law’s senior assistant dean and chief administrative officer.

Cannon also chairs the law school’s committee on the use of the Boalt name. He says the group determined that the original Boalt Hall name was philanthropic based on the gift, but when the law school moved to a new building in 1950, Boalt was part of honorific naming.

After her death in 1917, Elizabeth Boalt’s estate created two endowed faculty chairs, and there appears to be requirements to keep the Boalt name associated with those, Cannon says.

The law school stopped using the Boalt name in branding 10 years ago, in part because its former dean felt that the Berkeley name was more recognizable outside California, Cannon adds. However, he says that many still refer to the school as Boalt Hall, and the name is used in internal communications and in the name of some student groups.

“Many people wrote angry emails … we had to make it explicit this is not a renaming exercise, it is a proposal we dename part of the building that’s named after Boalt, and stop using it internally,” says Cannon.

In a recent email to the Berkeley Law community, Chemerinsky wrote that many universities face difficult questions about using the names and images of people who took positions that today are seen as hateful. He also notes that many alumni, some of whom call themselves “Boalties,” are attached to the name.

“Of course, they may and will continue to do so if they wish. The issue, though, is whether we should officially use the name ‘Boalt’ in light of John Boalt’s racist statement,” the email reads.

In considering the Boalt name, the school surveyed 2,000 people with Berkeley Law connections. Of those, 47 percent were in favor of striking any campus reference to the name Boalt, 33 percent were in favor of keeping the Boalt name association and 11 percent supported changing the name reference to Elizabeth Boalt. The remainder of respondents expressed other opinions, Cannon says.

“A lot of older alums don’t care, but some do. We had an older alum present the case for removing the Boalt name, because his daughter convinced him it was important,” says Cannon, adding that a recent alumni—who is Chinese-American—spoke at a February town hall meeting in favor of keeping the Boalt name, to remember the history.

Asian-American students comprise 18.4 percent of Berkeley Law’s students, according to its 509 Report.

“Given the makeup of the student body, this is a demeaning name to bear,” Cannon says.

Public comment about using the Boalt name at Berkeley Law will close Oct. 31 and Chemerinsky will decide whether to formally apply to the campus to dename Boalt Hall, according to Cannon. Then the matter would go to the UC Berkeley chancellor and the UC system president with the UC Regents having final approval.