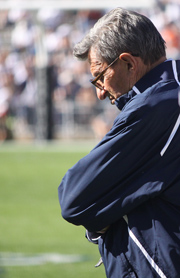 Penn State coach Joe Paterno and other university leaders failed to protect children from abuse by Jerry Sandusky, according to a report by former FBI director Louis Freeh.

“Our most saddening and sobering finding is the total disregard for the safety and welfare of Sandusky’s child victims,” Freeh said. “The most powerful men at Penn State failed to take any steps for 14 years to protect the children who Sandusky victimized.” Freeh said the officials “repeatedly concealed critical facts” in an effort to avoid bad publicity. The New York Times, Reuters and the Washington Post have stories.

The university’s board of trustees hired Freeh and his law firm to investigate after Sandusky was charged with child abuse. Sandusky was convicted on 45 counts in June.

According to the Times, a “new and central finding” of Freeh’s probe is that Paterno knew of concerns about Sandusky as long ago as 1998. At that time, police investigated a claim that a child had been molested in a shower. Prosecutors did not charge Sandusky in that case.

Paterno, who died of lung cancer in January, had claimed he didn’t know about the 1998 case. Freeh disputes that claim. “The evidence shows that Mr. Paterno was made aware of the 1998 investigation of Sandusky, followed it closely, but failed to take any action, even though Sandusky had been a key member of his coaching staff for almost 30 years,” he said.

Freeh said there is no evidence the board of trustees knew of 1998 allegations, but the board failed to create an environment fostering reporting, according to the Post account.

The stories say the findings could have an effect on the university’s legal liability. According to Reuters, “The report could also shed light on any criminal liability for two university officials charged with perjury and failing to report what they knew about Sandusky.” The officials, athletic director Tim Curley, and vice president of business administration Gary Schultz, have pleaded not guilty.