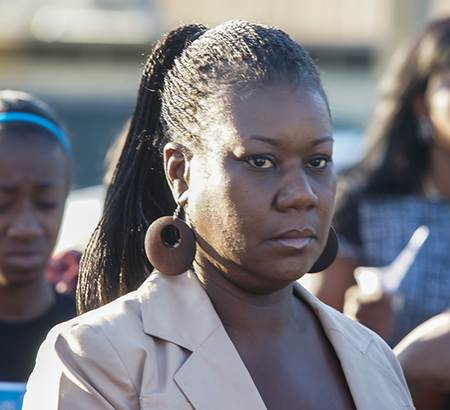 Trayvon Martin’s mother, Sybrina Fulton, appears at a 2012 rally after George Zimmerman shot and killed her son. Fulton is one of the named defendants in Zimmerman’s lawsuit. (Photo by Ira Bostic / Shutterstock.com)

George Zimmerman has sued the family of Trayvon Martin, the unarmed black Florida teen he shot and killed in 2012, in a lawsuit filed Wednesday by controversial lawyer Larry Klayman.

The $100 million suit also targets a lawyer for Martin’s family and prosecutors who tried Zimmerman for second-degree murder in 2013, resulting in a 2013 acquittal, report the South Florida Sun Sentinel, the Miami Herald and the Daily Beast.

Zimmerman was a neighborhood watch volunteer who said he was acting in self-defense when he shot Martin, who was returning to the home of his father’s fiancee after buying Skittles and a drink.

The suit claims a witness in the murder trial, Rachel Jeantel, misrepresented herself to prosecutors as Martin’s girlfriend, “Diamond Eugene,” before the trial. The girlfriend had been speaking with Martin on the phone just before an altercation with Zimmerman, the suit said. But the real “Diamond Eugene” was Brittany Diamond Eugene, Jeantel’s half sister, who refused to testify falsely, the suit alleges.

The lawsuit alleges malicious prosecution by prosecutors and a civil conspiracy by the defendants to put on a false witness. The suit also alleges defamation by the lawyer, Ben Crump, and by HarperCollins Publishers, the publisher of Crump’s book, Open Season: Legalized Genocide of Colored People.

The suit includes information from a documentary called The Trayvon Hoax: Unmasking the Witness Fraud that Divided America. The director is Joe Gilbert, a frequent Infowars guest who is known for right-wing conspiracy theories, according to the Sun Sentinel and the Daily Beast.

A prior film by Gilbert was based on the theory that President Barack Obama was the secret son of an American labor leader and Obama was raised to lead a communist revolution. Gilbert also pushed debunked claims that Obama wore a ring inscribed with a Muslim prayer and that President Bill Clinton had a secret son with a prostitute, according to the articles.

Klayman has been described by the Southern Poverty Law Center as “a pathologically litigious attorney and a professional gadfly notorious for suing everyone from Iran’s Supreme Leader to his own mother,” according to the Daily Beast. He is a founder of the group Legal Watch, which frequently sued Bill and Hillary Clinton, but he has since split from the group. A New York judge who refused to grant Klayman pro hac vice admission to litigate a case in the state in 2007 cited one judge’s observations that Klayman had made “preposterous” claims and displayed “abusive and obnoxious” behavior.

Klayman is currently fighting a Washington, D.C., ethics panel recommendation that he be suspended from law practice for 33 months for allegedly increasing compensation demands after a client refused his romantic advances. Klayman denied the allegations and claimed the case was “a political hit job” by the left.

Klayman issued this statement to the Daily Beast: “George Zimmerman seeks justice not just for himself, but for all of those others victimized by dishonest prosecutors who seek convictions to further their political and other unethical agendas to advance their careers. He also seeks justice against those who would divide the nation by pitting the races against each other for ‘fun and profit,’ including the Martin family attorney Benjamin Crump.”

Crump issued a statement on behalf of himself and Martin’s family. It reads: “I have every confidence that this unfounded and reckless lawsuit will be revealed for what it is—another failed attempt to defend the indefensible and a shameless attempt to profit off the lives and grief of others.

“This plaintiff continues to display a callous disregard for everyone but himself, revictimizing individuals whose lives were shattered by his own misguided actions. He would have us believe that he is the innocent victim of a deep conspiracy, despite the complete lack of any credible evidence to support his outlandish claims.

“This tale defies all logic, and it’s time to close the door on these baseless imaginings.”