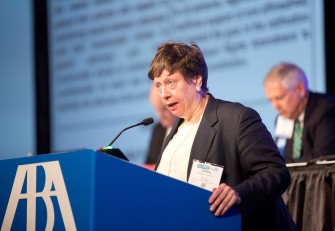 On Monday morning, the ABA House of Delegates adopted Resolution 10A (PDF), which urges the Federal Bureau of Prisons to amend its policy of monitoring emails between federal prisoners and their attorneys.

Carol A. Sigmond of the New York County Lawyers’ Association, the resolution’s sponsor, told delegates that the legal profession is at a crossroads, with pressure from government, technology and others that’s eroding the attorney-client privilege. And that privilege, Sigmond said, “is what distinguishes us from LegalZoom.”

The federal government requires that users of TRULINCS, the email system for federal prisoners, waive attorney-client privilege—and at least six federal courts have held that that waiver means privilege doesn’t apply to those messages. But in-person visits or physical mail are inefficient, particularly with prisoners, the bar group says.

The resolution was adopted with no significant opposition.