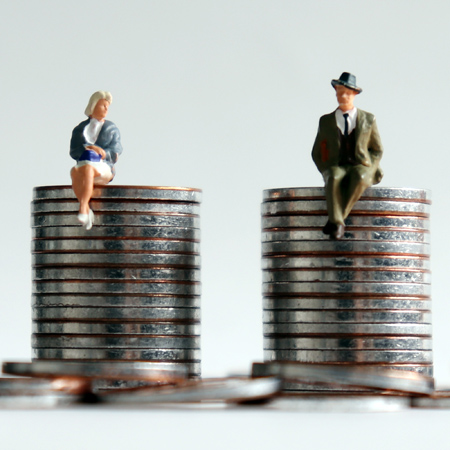 The ABA House of Delegates passed two resolutions that support fair compensation at the annual meeting in San Francisco.

Resolution 106, sponsored by the Commission on Women in the Profession, urges employers of lawyers to implement practices that close the pay gap between male and female lawyers. It provides a list of best practices and policies, such as considering significant numbers of women, including diverse women, as candidates for leadership roles and not relying only on past salary history when setting new hires’ compensation.

Stephanie Scharf, chair of the Commission on Women in the Profession, introduced the resolution to the House of Delegates. She said the focus was on compensation “for people who do the same type of work at the same level for the same employer,” but still end up with a significant pay gap that can be traced to their gender.

Scharf also said the resolution recognizes that not all workplaces are the same, and that not all policies and practices can work for every employer.

“That is why upfront in the resolution we recommend a range of practices and policies that can be used depending on the circumstances,” she said.

The ABA has long opposed gender inequality in the workplace. And, as early as 1972, the House of Delegates adopted a policy that condemned all forms of discriminatory hiring practices specifically in the legal profession.

Past President Laurel Bellows created the Task Force on Gender Equity in 2012 to help eliminate bias in the legal profession, particularly focusing on the pay disparity between male and female lawyers. Immediate-past President Hilarie Bass implemented a presidential initiative to increase the number of female lawyers who pursue successful legal careers in 2017.

The Commission on Women in the Profession—which as a Goal III entity works to secure full and equal participation of women in the legal profession—has also published reports that explore factors leading to pay gaps for women of color in law firms and corporations.

Scharf told the House of Delegates that she is convinced the pay gap does not arise out of “malice or obvious desire to underpay women, but history and habit are not friends of change.”

“We can lead the way by giving employers the guidance and ideas and recommended best practices to do things differently, to eliminate the gender pay gap so that in our profession, gender will not be the reason why you earn more or less,” she said. “It will be your work, your talents and your achievements that set your compensation.”

Resolution 115B, sponsored by the Civil Rights and Social Justice Section, urges Congress, states and territories to pass legislation that provides stronger remedies and protections against pay discrimination on the basis of sex, race or ethnicity and for employees with disabilities.

The resolution—which builds on a policy adopted by the House of Delegates in 2010 that called on federal legislation to enhance remedies and procedures that could better protect employees against pay discrimination—also passed on Tuesday.

Mark Schickman, chair of the Civil Rights and Social Justice Section, said the House of Delegates has long expressed its view that there should be equal pay regardless of sex, race or ethnicity.

“We are taking concrete steps and trying to make our broad statements into a reality,” he said. “For the performance of equal work, there should be equal pay.”

The pay gap between men and women will not close until 2106 at the current rate, according to the report that accompanies the resolution. And in 2019, women nationwide will lose nearly $900 billion as a result of the pay gap.

Before the resolution passed, it was amended to include the words “employees with disabilities.”