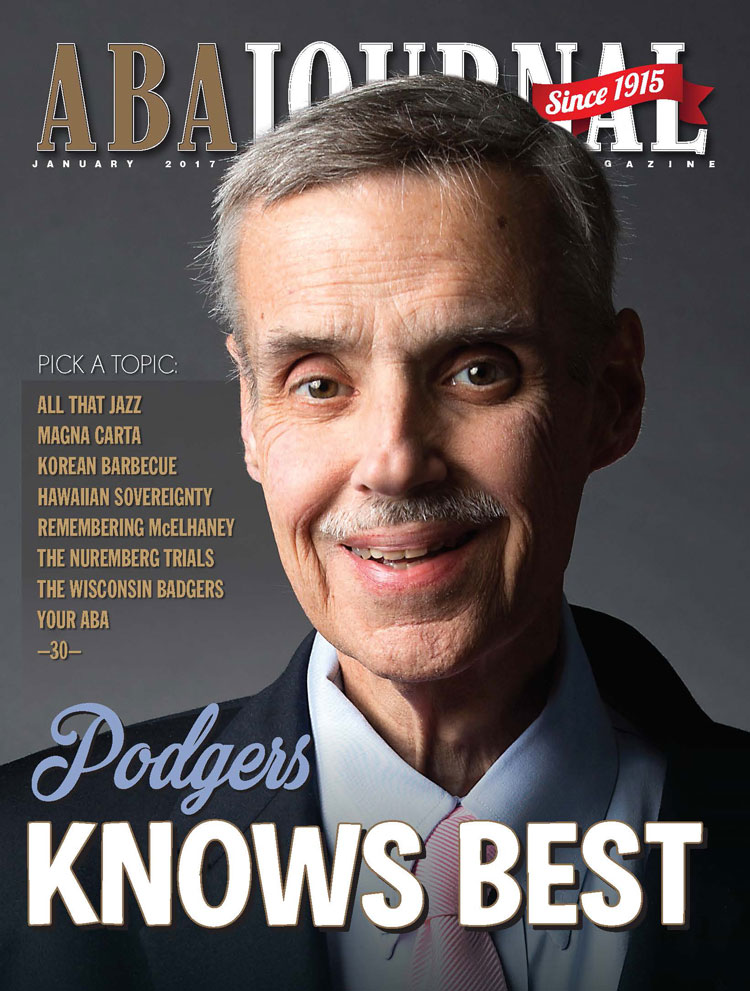 An ABA Journal cover created by staff in honor of Jim Podgers’ retirement in 2017.

James Podgers, a retired ABA Journal editor known for his deep knowledge of the American Bar Association and its inner workings, has died at the age of 67.

Podgers died Thursday from islet cell neuroendocrine cancer, barely one year after his retirement. He had battled the cancer for 14 years, but that didn’t stop him from spending long days as an assistant managing editor sharpening copy and writing articles about two of his favorite topics: the association and international law.

Podgers’ wife, Cis Redmond, said her husband would have wanted his specific cancer diagnosis in his obituary. “He would complain bitterly that obits usually don’t include the cause of death; I laugh thinking of him wondering how this or that person died, and he didn’t even know them!” she told the ABA Journal in an email.

Podgers interviewed a wide range of people in his work for the ABA Journal. They included former President Gerald Ford, Telford Taylor (an attorney who assisted Robert Jackson at the Nuremberg tribunals), Bianca Jagger and numerous ABA presidents. While on assignment in London, he approached the podium after a speech by Margaret Thatcher and pilfered her paper clip, Redmond recalls.

He wrote about political divisions in the ABA, the Nuremberg trials, the creation of the International Criminal Court, and the Hawaiian sovereignty movement. His last article, written for the ABA Journal as a freelancer, profiles a lawyer whose hobby is bullfighting.

“Jim was the picture of a classic Chicago journalist,” said Molly McDonough, editor and publisher of the ABA Journal. “He was inquisitive, dogged and skeptical.”

Podgers was “truly devoted to the craft,” McDonough recalled. “Jim was a good listener, a serious editor and maintained his dry sense of humor till the end. In my last conversation with him about a week before he died, Jim called me in part to let me know he wouldn’t be able to turn in his last assignment.

“He’ll always have a place in our hearts and ABA Journal lore.”

Podgers, a lawyer, worked for the ABA for 30 years, in two different stints. He left the ABA Journal after working there three years as a reporter. He rejoined the Journal staff in 1992 as an editor. He also worked as a reporter for the Joliet (Ill.) Herald-News and as the assistant dean for public affairs at Chicago-Kent College of Law. He has a bachelor’s degree in history from the University of Wisconsin at Madison and a J.D. from Chicago-Kent College of Law.

He also had a love of travel, books, jazz, golf, friendly poker games and the Wisconsin Badgers. He was the lead saxophone player in a big band group and a charter member of FATS at UW-Madison.

FATS is an acronym for Federation of All-Star Tummy Stuffers, Podgers’ wife explained. Other members included a professor, a doctor, a priest, a radio personality and a comedian. “He collected interesting friends,” Redmond recalled.

In a bereavement notice to ABA staffers, ABA Journal Managing Editor Reginald Davis noted that Podgers was known for his “cogent questions” at the end of staffwide information sessions known as town hall meetings. Before his death, Podgers received an email about another staffer “who is bravely taking over his task of asking the questions at the town halls,” Redmond said. “We got a charge out of that. He loved the ABA.”

In addition to his wife, Podgers is survived by their children, Kevin, Michael and Hilary.

A selection of articles by James Podgers:

ABA Journal: “The World of McElhaney: Jim McElhaney Closes the Book on a Storied Career, But Angus Lives on”