Desperate to replenish the state’s supply of road salt at the tail end of a brutal winter, New Jersey officials have arranged to purchase 40,000 tons in Maine.

But the available bulk transport ship that was to bring it to New Jersey can’t do the job because it operates under a Marshall Islands flag, and it is now en route to Newark, N.J., empty, NJ101.5 reports. The federal Jones Act requires the salt to be sent on a U.S.-flagged ship because it is being transported between two American cities. 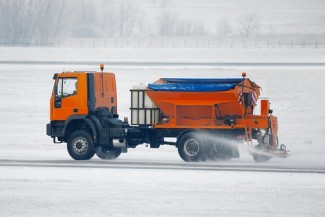 Perspectives differ about the efforts that have been made so far to get a waiver of the Jones Act in what amounts to an emergency situation and the degree to which the feds have cooperated.

“America’s domestic maritime industry is responding to a last-minute request for road salt to help the people of New Jersey,” said chairman Thomas A. Allegretti of the American Maritime Partnership in a written statement to the station. “The industry is joining with other modes of transportation and road salt providers to ensure the state has the resources it needs amid widespread demand. New Jersey has filed a request for a Jones Act waiver for a foreign-flagged vessel, and we are confident it will be considered fairly and appropriately in accordance with federal law.”

But Jim Simpson, who is in charge of the state Department of Transportation, was clearly frustrated in an interview with the station Friday morning.

As a shipload of salt awaited transport 400 miles away, he said, “the only thing that we’ve been able to define as an American flag vessel would take us a month to get the salt here when I can have the salt here in a day and a half.”