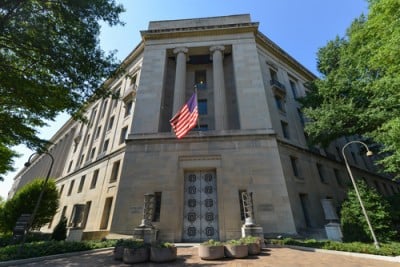 A Russian woman attending American University in Washington, D.C., on a student visa is accused of conspiring to work as an agent for Russia to establish “back channel” communication with U.S. politicians and advance the Russian agenda.

The woman is identified in a Justice Department press release as 29-year-old Maria Butina, but court documents say an alternative spelling of her first name is “Mariia.” A criminal complaint and affidavit unsealed Monday say Butina worked for a high-level official at the Russian Central Bank who was a former member of the Russian legislature. She did not notify the U.S. attorney general of her efforts, the affidavit says.

The New York Times, the Washington Post, NPR and the Wall Street Journal have coverage.

The affidavit says Butina established contact with a U.S. political operative in Moscow in 2013 to arrange introductions to persons having influence in American politics, including a “gun rights organization.” Media reports say the organization is the National Rifle Association.

According to the affidavit, Butina attended the gun group’s events and a National Prayer Breakfast, obtained seats for a Russian delegation to a second National Prayer Breakfast, wrote an article arguing that U.S. politicians and Russia share many common interests, and tried to organize several Russian-American friendship and dialogue dinners, some of which are believed to have taken place.

The article written by Butina argued that the U.S. and Russia could improve relations with the election of a Republican president.

According to the affidavit, Russian influence operations are a threat to U.S. interests because they are low-cost and relatively low-risk ways to shape perceptions. “Moscow seeks to create wedges that reduce trust and confidence in democratic processes, degrade democratization efforts, weaken U.S. partnerships with European allies, undermine Western sanctions, encourage anti-U.S. political views, and counter efforts to bring Ukraine and other former Soviet states into European institutions,” the affidavit said.

Butina’s lawyer, Robert Neil Driscoll, said in a statement after a federal court hearing on Monday that Butina is not an agent of Russia and has been cooperating with government entities.

“The substance of the charge in the complaint is overblown,” Driscoll said. His client, he said, was only networking to develop relationships with Americans.

Previous reports have said Butina worked for a Russian official named Alexander Torshin, who was sanctioned by the U.S. Treasury Department in April. Torshin is a lifetime member of the NRA, according to the Post.

The Times previously reported that Butina had a close relationship with NRA member and conservative activist Paul Erickson, who was part of an effort to arrange a meeting between Vladimir Putin and Donald Trump.

The criminal complaint was filed by the Justice Department’s National Security Division and the U.S. Attorney in Washington, D.C.