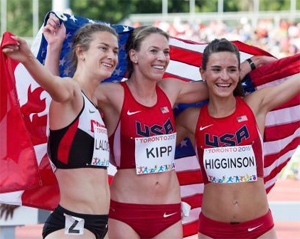 A legendary New Jersey high school and college athlete didn’t take the bar exam right away after earning her law degree in May.

That’s because Ashley Higginson was focusing on the Pan American Games this month in Toronto. She not only won a gold medal there last week in the women’s 3000 meter steeplechase but also set a meet record with a time of 9:48.12, reports New Jersey Advance Media. The 3000 meter steeplechase is a footrace on a track with seven water jumps and 28 hurdles.

While earning her law degree at Rutgers, Higginson also ran at least 70 miles per week, in addition to participating in strength training and physical therapy.

She earned her degree with honors, points out former dean John Farmer Jr. of Rutgers Law School-Newark, who taught Higginson there. “As a former runner, I am pretty much in awe,” he said.