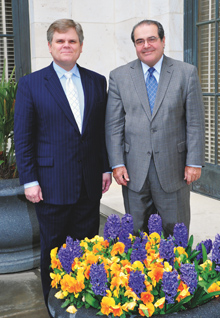 Disagreement in print comes naturally to former academics, according to Judge Richard Posner.

The Chicago-based judge from the 7th U.S. Circuit Court of Appeals cites that proclivity in response to a blogger’s question about his harsh review of Reading Law, the new book by Justice Antonin Scalia and Bryan Garner, the editor-in-chief of Black’s Law Dictionary and the president of LawProse Inc.

Posner’s review picks apart the authors’ defense of “textual originalism” in their 567-page tome. He accuses Scalia and Garner of leaving out evidence that doesn’t support their thesis, misrepresenting case rationales, and a “pattern of equivocation.”

In an email to Posner, Above the Law called his review “a wee bit harsh” and asked about his personal relationship with Scalia. “There is no personal animosity between Justice Scalia and me, or at least not on my side,” Posner replied. He and Scalia were once colleagues at the University of Chicago law school, but Posner says they haven’t seen each other for five or six years.

“I suppose it’s unusual for a lower court judge to criticize judicial or extra-judicial work by a Supreme Court justice in public,” Posner says. But he has criticized Scalia before in an article on the justice’s opinion in District of Columbia v. Heller holding the Second Amendment protects a right to own guns. Judge J. Harvie Wilkinson III of the Richmond, Va.-based 4th U.S. Circuit Court of appeals also wrote a critical law review article about the opinion, Posner said. “It’s probably not an accident that both Judge Wilkinson and I are former academics, to whom disagreement in print, without personal animosity having engendered it, comes naturally.”

Garner responds to Posner’s review in a post at LawProse that also mentions personal relationships. Garner says he wasn’t surprised that Posner failed to “warmly embrace” the book. “But I was unduly sanguine in thinking that my friendship with Judge Posner (such as it is—we’ve shared several meals since the 1990s and have always had convivial conversations) would ensure at least a fair reading of our book on ‘fair reading.’ ”

The book contained nuance rather than equivocation, Garner says, and the fact that some cases were decided on more than one ground does not mean they can’t serve as examples of their 57 “canons of construction.”

Posner “smears the book with accusations of sloppy research and poor case explanations” in a review marked by “tendentious hostility,” Garner says. Cases were chosen in the book because they “contained lively problems” and illustrated how the authors’ canons of construction worked, Garner says. “In citing examples, we were much more interested in the textual problems posed than in the solutions that courts provided. Instead, we explained our solutions, often noting points of agreement and disagreement with the courts that actually decided the cases.”

Garner also takes issue with a statement in Posner’s review claiming their book is a response to criticism of Scalia’s Heller opinion. “What?” Garner writes. “I spent three-and-a-half years immersing myself in the literature of statutory interpretation, scouring hundreds of books and a thousand-plus articles to write a full-length treatise, merely to help my coauthor respond to criticism about one case? What a breathtakingly and self-evidently farcical statement.”

Former Scalia law clerk Ed Whelan also takes issue with Posner’s criticism in posts at the National Review Online. “It is no small matter that Posner has abused his reputation to smear Scalia and Garner with his incendiary and ill-founded charge that they have broadly misrepresented the cases that they discuss,” Whelan writes in the third of a series of blog posts. “Posner owes Scalia and Garner a prominent retraction and apology.”

ABAJournal.com: “Scalia Discusses Views on Textualism and the Process of Co-Writing His New Book”