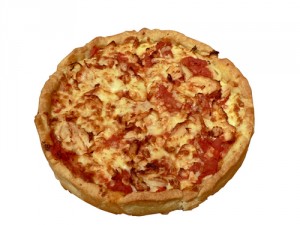 Justice Antonin Scalia says he likes Chicago-style pizza, but he quibbles with the name.

Chicago-style “shouldn’t be called pizza” he said. “It’s very tasty, but it’s not pizza.” The Chicago Sun-Times noted the comment, while the Chicago Tribune described the audience reaction: “a chorus of boos.”

Scalia weighed in on pizza during an appearance on Friday evening at the Union League Club, the stories say. He also talked about the decline in civics education, and said he is concerned about the removal of religious ideals from public education.

It’s against the nation’s founding principles, he said, for government to be hostile to religion. “It is a matter of believing, as our founders did, that belief in God is very conducive to a successful republic,” Scalia said.

Asked if America has reached a tipping point that will put it on a downward trajectory, Scalia skirted the question, according to the Tribune account. “The framers were very worried about whether democracy could last very long. The game isn’t up yet, 200 years is a good long time,” he said.

But “I don’t think we can be too cocky about America always being America. It’s going to change unless the people have the same determination to preserve liberty that the framers had.”