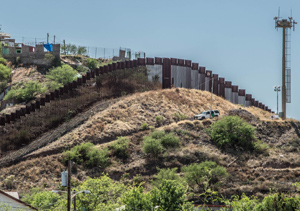 A portion of the border fence which separates Mexico from Nogales, Arizona.

Updated: President Trump’s plan to build a wall along the Mexican border could hit an obstacle if he relies on a 2006 law for funding authority.

The obstacle is a June 2015 majority opinion by Justice Antonin Scalia that said the Environmental Protection Agency did not properly consider the costs when it decided to limit mercury emissions from power plants, according to a New York Times op-ed by three University of Chicago law professors.

At issue was a Clean Air Act provision that required EPA regulation of hazardous emissions from power plants when “appropriate and necessary.” Scalia said that phrase required the EPA to consider costs. “No regulation is ‘appropriate’ if it does significantly more harm than good,” he wrote.

Trump’s executive order, signed on Wednesday, calls for immediate construction of the wall. But he needs funds to build it, and Mexico has said it won’t pay. If Trump asks Congress to pass a new law, Senate Democrats could mount a filibuster. His executive order cites the Secure Fence Act of 2006, according to this story in the Atlantic, and he may be relying on it for funding authority, according to the op-ed.

Congress could rely on the normal appropriations process to fund the wall through the Secure Fence Act, which would be more difficult to block than new legislation, the Washington Post explains here.

The op-ed identifies a problem, however. The Secure Fence Act authorizes the secretary of homeland security to take actions to secure the border that are “necessary and appropriate.” That language, like the Clean Air Act language, requires consideration of cost, according to the op-ed by law professors Daniel Hemel, Jonathan Masur and Eric Posner. And the cost-benefit analysis does not favor the wall, they conclude.

Trump has said his wall could cost $8 billion, but other estimates have put the cost at $15 billion to $25 billion, the professors say. As for the benefits, the wall won’t stop the majority of immigrants in the country illegally, because they are in the country by overstaying their visas. And the wall won’t stop smugglers from tunneling underneath.

Trump has said the wall is needed to block immigrants who come to the country illegally and commit crimes, but there is no evidence such immigrants commit crime at a higher rate than others, the law professors say.

If the wall does work, the economic effects of reducing immigrants in the country illegally would likely be zero or negative, the op-ed says. That’s because such immigrants pay taxes, spend money and enhance American productivity.

After the op-ed was published, White House press secretary Sean Spicer said Trump plans to pay for the wall with a 20 percent tax on imports into the United States from Mexico. The New York Times story is here. New legislation would be needed to impose the tax.

Updated at 3 p.m. to include Trump’s plan to pay for the wall with a tax on imports from Mexico.