Self-styled crime reporter is charged with misuse of information; she sees free-speech violation 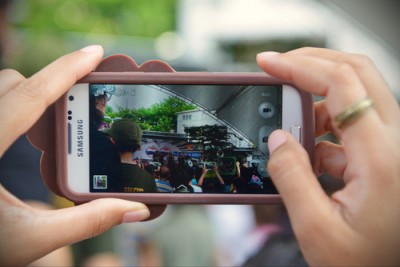 A Texas woman who heads to crime scenes and broadcasts her own crime reports on Facebook is facing charges after she broadcast the name of a man who committed suicide before the police department released the information.

Priscilla Villarreal Treviño was charged last month with two counts of misuse of official information after broadcasting the name, allegedly leaked to Villarreal by a Laredo, Texas, police officer, the Los Angeles Times reports. Villarreal claims a violation of her free-speech rights. The Laredo Morning Times has previous coverage here and here.

The suicide victim was an agriculture supervisory program manager with U.S. Customs and Border Protection.

Villarreal calls herself Lagordiloca—Spanish for “the crazy fat lady.” The Los Angeles Times describes her Facebook feeds as “a mix of raw news and gossip.” She is often recognized as she drives a Dodge Ram she bought for $700 while wearing a Lagordiloca T-shirt. She has more than 86,000 Facebook followers.

Villarreal began her social media reports after stumbling on a hostage situation, taping it and posting video clips that brought more than 800,000 views.

But some of her posts have caused problems, according to the Los Angeles Times. A day care center obtained a default defamation judgment against Villarreal for a report about alleged abuse there. Police were unhappy when her warnings of gas shortages from Hurricane Harvey sent drivers to gas stations, and when her warnings about a man with an urge to kill people brought parents to an elementary school. The man had already been detained.

In a statement released last month about Villarreal’s arrest, the Laredo Police Department said the investigation is fluid and ongoing. The department said it is committed to protecting everyone’s rights under the law, including the right to freedom of speech.

“Additionally, there is also an obligation to the protection of a person’s right to privacy as it relates to sensitive information,” the statement says.