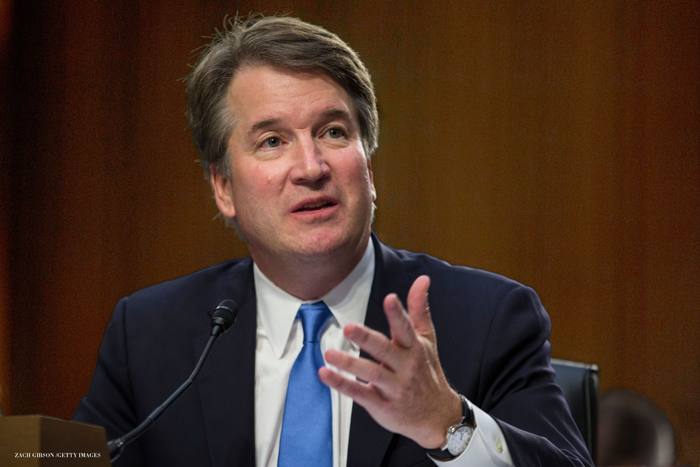 The Senate narrowly confirmed Brett Kavanaugh to the U.S. Supreme Court on Saturday following a tempestuous confirmation battle in which the federal appeals judge strongly denied allegations of sexual assault.

The vote was 50-48 in favor of confirmation.

Loud shouting could be heard before and during the vote. During debate, hundreds of protesters gathered on the Supreme Court steps and rushed barricades around the Capitol, the New York Times reports. Dozens were arrested, according to Politico.

Kavanaugh’s confirmation was viewed as assured after three key senators said they would vote yes: Republicans Susan Collins of Maine and Jeff Flake of Arizona, and Democrat Joe Manchin of West Virginia. The New York Times and the Washington Post covered the announcements.

One other Republican, Sen. Lisa Murkowski of Alaska, said she did not support Kavanaugh and would vote “present” to allow for the absence of Republican Sen. Steve Daines of Montana, who was attending his daughter’s wedding on Saturday. According to NBC, she opted to use a procedure known as a “pair between senators” in which the votes of a present senator and an absent senator cancel out the other, but the present senator’s vote is withdrawn and is instead recorded as present.

Murkowski told reporters that she believes Kavanaugh is a good man but he may not be “the right man for the court at this time.”

“This hasn’t been fair to the judge,” Murkowski said, “but I also recognize that we need to have institutions that are viewed as fair and if people who are victims, people who feel that there is no fairness in our system of government, particularly in our courts, then you’ve gone down a path that is not good and right for this country.”

Kavanaugh, 53, could join the Supreme Court as early as Tuesday, the Wall Street Journal reports. The court is hearing two sentencing cases that day.

The ABA Standing Committee on the Federal Judiciary unanimously gave Kavanaugh its highest rating of well qualified, but the committee notified the Senate Judiciary Committee on Friday that it was reopening the evaluation. “New information of a material nature regarding temperament during the September 27th hearing before the Senate Judiciary Committee has prompted a reopening of the standing committee’s evaluation,” said the letter by committee chair Paul T. Moxley.

The re-evaluation was not completed before the Senate vote.

Kavanaugh, a graduate of Yale’s law school and college, has been a judge on the U.S. Court of Appeals for the D.C. Circuit since 2006. He replaces retiring Justice Anthony M. Kennedy, for whom he once served as a law clerk.

At one point in the initial hearing, Sen. John Kennedy, R-La., asked Kavanaugh about his high school years at Georgetown Prep, a Jesuit school. Kennedy asked Kavanaugh whether he was more of a John-boy Walton type or a Ferris Bueller type.

Kavanaugh replied that he loved sports, he worked hard at school, and he had a lot of friends. He did not offer an answer as to his type.

Kavanaugh’s low-key demeanor had changed by the second hearing on Sept. 27. Kavanaugh angrily denied the sexual assault allegation by Christine Blasey Ford and complained of “an orchestrated political hit.” Later in his testimony, he fought back tears as he said he has no ill will toward Ford and recalled how his daughter had wanted to pray for her.

Ford testified that Kavanaugh sexually assaulted her at a party in 1982 when both were high school students. Ford said she was pushed into a bedroom and onto a bed at the party, and Kavanaugh got on top of her, groped her, and tried to take off her bathing suit while he and his friend Mark Judge laughed.

Later that day, the ABA urged the committee to delay a vote on Kavanaugh until “an appropriate background check into the allegations made by professor Ford and others is completed by the Federal Bureau of Investigation.”

The next day, the committee voted to advance Kavanaugh’s nomination to the full Senate after Flake said he had spoken with Democrats and it would be proper to delay a Senate vote until the FBI did an investigation that took no more than a week.

White House spokesman Raj Shah said the FBI contacted 10 people and interviewed nine of them, according to the Washington Post. The FBI did not interview Ford or Kavanaugh, but the agency reportedly spoke with former Yale classmate Deborah Ramirez, who has said Kavanaugh exposed himself during a drinking party and thrust his genitals in her face.

Democrats criticized the investigation as inadequate.

Kavanaugh defended himself in a Wall Street Journal op-ed published on Oct. 4.

Kavanaugh wrote that his testimony “reflected my overwhelming frustration at being wrongly accused, without corroboration, of horrible conduct completely contrary to my record and character. My statement and answers also reflected my deep distress at the unfairness of how this allegation has been handled.

“I was very emotional last Thursday, more so than I have ever been. I might have been too emotional at times. I know that my tone was sharp, and I said a few things I should not have said.”

Going forward, Kavanaugh said, “you can count on me to be the same kind of judge and person I have been for my entire 28-year legal career: hardworking, even-keeled, open-minded, independent and dedicated to the Constitution and the public good.”

President Donald Trump had stood behind his nominee, tweeting that his treatment had been “harsh and unfair” and praising Kavanaugh’s intellect.

Kavanaugh was also a partner in Kirkland & Ellis and worked for independent counsel Ken Starr, helping write Starr’s report arguing that President Bill Clinton could be impeached for lying to his staff and misleading the public. He was an associate counsel to President George W. Bush from 2001 to 2003, a senior associate counsel to Bush in 2003, and assistant and staff secretary to Bush from 2003 to 2006.