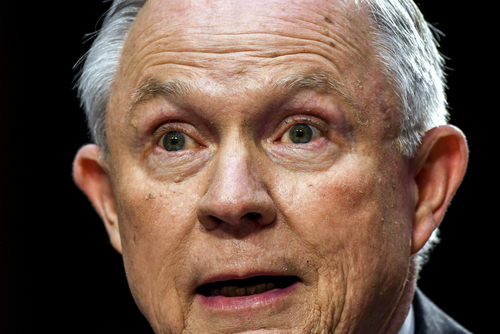 Sessions is directing U.S. attorney’s offices along the southwest border to prosecute all violations of the illegal entry law, to the extent practicable, according to a press release. The Washington Times, the Hill, the Associated Press and Fox News have stories.

The press release says Sessions was acting after a Department of Homeland Security report found that illegal border crossing increased 203 percent from March 2017 to March 2018.

“A crisis has erupted at our southwest border that necessitates an escalated effort to prosecute those who choose to illegally cross our border,” Sessions said in the press release.

Sessions directed southwest border prosecutors in a memo that they should request additional resources if they are needed to implement the policy.

According to the Times, illegal entry is a misdemeanor, but authorities have often processed the cases through the civil immigration system for quick deportations. The statute carries a possible penalty of up to six months in jail for a first offense.

In an effort to speed up immigration cases, Sessions announced a week ago that immigration judges will be evaluated based on the number of completed cases in a year.

Also on Friday, President Donald Trump signed a memo ordering the U.S. Department of Homeland Security to prepare a report on measures being taken to end “catch and release” practices, report CNN, the New York Times and the Hill. The phrase refers to the release of immigrants apprehended for immigration violations, according to the memorandum.

The order also requests a detailed list of facilities that can be used to detain immigrants apprehended for violations of immigration laws at or near the border. The New York Times calls the memo “a symbolic move by Mr. Trump to use his executive action to solve a problem that he has bitterly complained Congress will not.”

Story updated April 9 to report on “catch and release” memo signed by Trump.