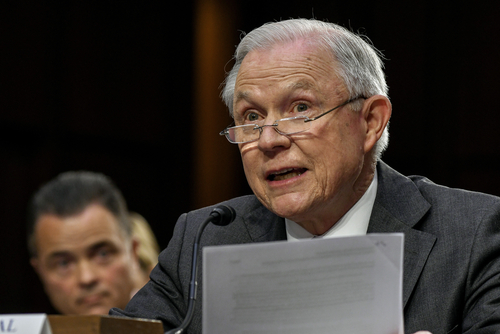 The memo (PDF) says Sessions is sticking to the language of the law, which bars discrimination in employment because of an individual’s sex. Title VII bans discrimination between men and women, but it “does not encompass discrimination based on gender identity per se, including transgender status,” he writes. BuzzFeed News and the National Law Journal (sub. req.) have stories.

The memo retracts a position established during the Obama administration.

The memo says it should not be construed to condone mistreatment on the basis of gender identity, or to express a policy view on whether Congress should amend Title VII to provide additional protections.

The Justice Department has already signaled it is giving a narrow interpretation to Title VII in an amicus brief submitted to a federal appeals court in July. The brief said Title VII does not protect workers from employment bias based on sexual orientation.

The memo and the amicus brief are at odds with the position of the U.S. Equal Employment Opportunity Commission, which says Title VII protects discrimination based on gender identity and sexual orientation.

Sharon McGowan, a former Justice Department lawyer who now works for Lambda Legal, says the memo doesn’t discuss developing case law. “It demonstrates that this memo is not actually a reflection of the law as it is—it’s a reflection of what the DOJ wishes the law were,” McGowan told BuzzFeed News.

“The American Bar Association is disappointed with the Department of Justice’s position reversing the department’s 2014 decision to protect employees from discrimination in the workplace based on gender identity.

“For decades, the ABA has vigorously opposed such discrimination and, more recently, has urged the enactment of legislation to strengthen protections for LGBT workers to further the ABA’s belief that all Americans—regardless of sexual orientation or gender identity—should be protected from discrimination in the workplace.”

Updated at 8:10 a.m. to include statement by Bass.