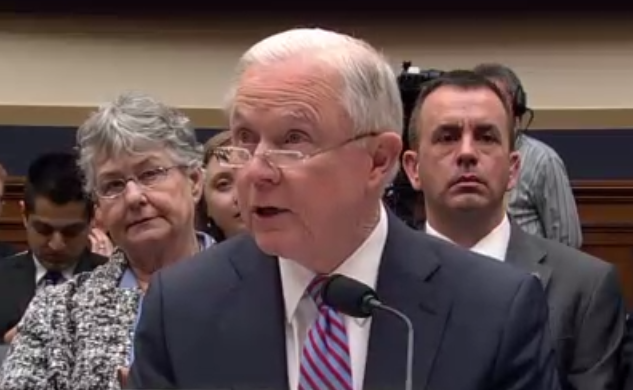 Attorney General Jeff Sessions told the House Judiciary Committee on Tuesday that he now recalls a meeting that included George Papadopoulos, the former foreign policy adviser who has said he suggested a meeting between Donald Trump and Vladimir Putin.

Sessions said that, although he now recalls the March 2016 meeting, he has “no clear recollection of the details” of what Papadopoulos said, report the Washington Post, Politico, USA Today and the New York Times.

Papadopoulos has said he told Sessions, Trump and others at last year’s meeting that he had connections who could set up one bewteen Trump and Putin, according to court records in the special counsel’s investigation. Sessions reportedly opposed the idea after Papadopoulos spoke.

Sessions had previously told Congress he didn’t know about any contacts between the Trump campaign and Russian officials.

Sessions said Tuesday that he didn’t lie in previous testimony because “I had no recollection of this meeting until I saw these news reports.”

“I will not accept—and reject—accusations that I have ever lied,” Sessions testified.

Sessions said that after reading the account of the meeting by Papadopoulos, he believes he wanted to make clear to Papadopoulos “that he was not authorized to represent the campaign with the Russian government, or any other foreign government, for that matter.”

Papadopoulos pleaded guilty in October to lying to the FBI about his contacts with foreign nationals he believed to be connected to Russian officials.

Sessions also said he didn’t recall a meeting in which campaign adviser Carter Page reportedly told Sessions about a planned trip to Russia.

Sessions was also asked about the Justice Department’s disclosure that he is considering whether to appoint a special counsel to investigate Republican concerns. Sessions said any decision would be made “without regard to politics, ideology, or bias.”

On another matter, Sessions said he sees no reason to doubt women who said U.S. Senate candidate Roy Moore pursued relationships with them as teens nearly 40 years ago, when Moore was in his 30s. Moore is the former chief justice of Alabama.

One of the accusers said she was 14 years old when Moore took her to his home, undressed her to her underwear and fondled her. Some have suggested that Sessions should launch a write-in campaign to regain his old Senate seat in the Dec. 12 special election.