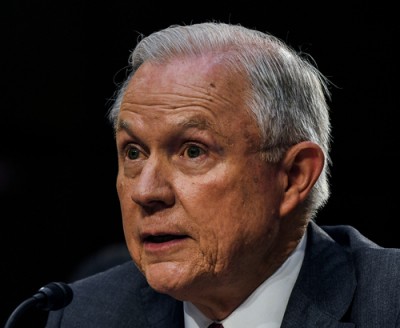 Attorney General Jeff Sessions announced Monday that he is implementing a zero-tolerance policy for illegal crossings at the Southwest border and aims to prosecute “as many of those cases as humanly possible until we get to 100 percent.”

Sessions said parents will be separated from their children if they bring them along when crossing the border, the Washington Post reports.

“If you’re smuggling a child, then we’re going to prosecute you, and that child will be separated from you, probably, as required by law,” he said. His prepared remarks did not include the word “probably.”

Sessions announced his plans in a speech in Scottsdale, Arizona, and in remarks to reporters in San Diego. Other publications with coverage include the Los Angeles Times, the Wall Street Journal and the New York Times.

The government is not allowed to jail immigrant children as a result of a federal court settlement. If their parents are held in jail, the children will have to be taken elsewhere, the Journal explains.

Sessions said people illegally crossing the border may be fleeing danger or despair, but, “We cannot take everyone on this planet who is in a difficult situation.”

Previously, people caught at the border were often bused back without being charged, according to the Los Angeles Times. Border agents had also tried to keep parents and children at the same detention site.

Crossing the border illegally is a misdemeanor punishable by up to six months in prison for a first-time offender. Repeat violations are a felony carrying a sentence of up to two years in prison.

Sessions said that if people like the heckler “don’t like what we do, call your congressman to change the law.”

Sessions announced a zero-tolerance policy on April 6. On May 2, he said 18 supervisory immigration judges would be used to hear immigration cases near the border, and 35 new assistant U.S. attorneys would be sent to Southwest border states to handle prosecutions of improper entry, illegal re-entry, and alien smuggling.