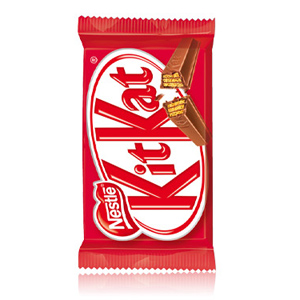 If the KitKat name wasn’t printed on the four connected “fingers” of a well-known candy bar, would customers know it was a KitKat without seeing the wrapper?

The answer to that question in the United Kingdom is no, according to a Wednesday ruling by the High Court of Justice of England and Wales which sided with the competing Cadbury company. It said the shape of the candy bar cannot be trademarked by Nestle, its manufacturer in that country, according to BBC News, CNN Money and the Drum.

The ruling, which gives a green light to rival candymakers to market similar-looking products, follows an earlier U.K. court battle in which Nestle successfully opposed Cadbury’s effort to trademark the shade of purple used on its Dairy Milk candy bar wrapper.

Nestle said on Wednesday it plans to appeal the High Court’s ruling.

“Consumers will tend to be influenced by a brand name and the outer packaging of a product rather than its shape alone, so the threshold for registering shapes as trademarks is high,” attorney Sharon Daboul of EIP, who is not involved in the KitKat case, told the Drum. “However, whilst is it rare to win trademark protection for shapes, it is not impossible; the Toblerone shape and Nestle’s Walnut Whip are both protected.”