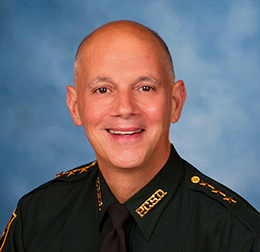 A Florida sheriff says he can’t charge a man for fatally shooting another man who shoved him to the ground in a parking lot dispute because of the state’s stand-your-ground law.

Sheriff Bob Gualtieri of Pinellas County announced on Friday that shooter Michael Drejka was protected by the law, report the Washington Post, the New York Times and the Tampa Bay Times.

Surveillance video showed the confrontation and shooting of Markeis McGlockton on Thursday at a Clearwater convenience store. McGlockton’s girlfriend, Britany Jacobs, had pulled the car into a handicapped parking spot and McGlockton went inside for snacks while she sat in the car with her children.

Drejka looked at the car, and when he didn’t see a handicapped decal began to lecture Jacobs. “He was picking a fight,” Jacobs told Good Morning America. “I’m just sitting, waiting for my family to come back to the car.” ABC News reports on the interview.

McGlockton came out of the store after a witness said someone was in the parking lot messing with a woman in the car, Jacobs told Good Morning America. McGlockton shoved Drejka to the ground. Drejka took out his handgun and shot and killed McGlockton. Drejka, who is white, had a concealed weapons permit. McGlockton is black.

Gualtieri, who has a law degree according to the Post, said a person who feels threatened has a right to shoot. Drejka thought “he was going to be struck again and he was in fear.”

“No matter how you slice it or dice it that was a violent push to the ground,” Gualtieri said in a press conference. The sheriff told the Tampa Bay Times that the case will be forwarded to prosecutors for a final decision.

A trucker told the Florida newspaper that Drejka had also confronted him a few months ago when he parked in the same handicapped space. But Gualtieri said the legal question does not depend on Drejka’s record of parking lot policing.

The law was also an issue when George Zimmerman was acquitted in the 2012 shooting of 17-year-old Trayvon Martin.

Florida’s law removes the duty to retreat when a person feels threatened, and permits the use of deadly force if the person reasonably believes it is necessary to prevent imminent death or great bodily harm.

A change to the law year requires prosecutors to have the burden of proof in in pretrial stand your ground hearings, the Associated Press reported at the time.

People who use justified force are immune from criminal prosecution and civil action, according to another section of the law. Law enforcement agencies aren’t permitted to make an arrest in such situations.