Show Me the Money: States, ABA Try to Figure Out When Campaign Cash Leads to a Judge’s Recusal 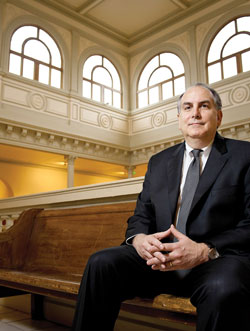 U.S. Supreme Court Justice Anthony M. Kennedy placed great faith in the appearance of impropriety in June 2009 when the court tried to determine how much spending on judicial campaigns is enough to affect a judge’s impartiality and cause the judge’s removal from a case.

The facts in Caperton v. Massey made the decision relatively easy. West Virginia coal magnate Don Blankenship had spent some $3 million in 2004 to help elect a state supreme court justice when Blankenship’s A.T. Massey Coal Co. had a case coming before the court. The Blankenship bankroll totaled more than the amounts raised by the two candidates combined and their supporters. Blankenship’s man won and joined in the vote to reverse a $50 million judgment against Massey.

Money may not buy love, but the $3 million bought Blankenship justice, at least until the U.S. Supreme Court took up the matter. The circumstances and the amount alone were enough to create a risk of bias, Kennedy wrote, so due process required newly elected Justice Brent Benjamin to recuse himself from the coal company’s case. “The facts now before us,” Kennedy wrote, “are extreme by any measure.”

Nearly three years later, however, fewer than a dozen states have rewritten their recusal rules to account for more common instances of political spending that may not rise to the level of the hard constitutional foul called in Caperton, but that nevertheless create potential conflicts of interest for judges significant enough to warrant disqualification.

In the meantime, another campaign finance shoe dropped in the high court just six months after Caperton. In January 2010, the suggestion of an improper motive meant nothing when Kennedy authored for a different majority the lead opinion in Citizens United v. Federal Election Commission.

There, the court held the First Amendment allows corporations and unions to spend as much as they want to support or defeat candidates. Congress in the 2002 McCain-Feingold Act had limited corporate expenditures as a way to fight corruption or its probability.

Those days are gone, Kennedy wrote: “We now conclude that independent expenditures, including those made by corporations, do not give rise to corruption or the appearance of corruption.”

The court’s contradictory positions in the two decisions effectively leave the rule-makers in a delicate position. On one hand, lower courts read Caperton as a command to impose new rules on themselves to ward off the perceived evil of campaign cash.

On the other, they must do it in a post-Citizens United world that erases most of the rules governing corporate spenders. Talk about getting whipsawed.

Moreover, Citizens United addresses independent spending separate from campaigns, such as ads supporting or condemning a particular office seeker. Candidates have no control over that. So, under widely varying state disclosure rules, a judge targeted by a recusal motion initially may not even know the source of the questioned support or opposition.

Click here to read the rest of “Show Me the Money” from the March issue of the ABA Journal.