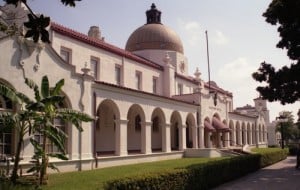 The small town of Hot Springs, Arkansas, once home to Bill Clinton, is the No. 1 place for law grads, according to a ranking by a startup that culls data on education, careers and personal finance.

The list by Good Call “features a slew of off-the-radar towns,” Law.com (sub. req.) reports. The largest city to make the top 10 is Los Angeles, ranked at No. 7.

The list is based on affordability, rather than average salaries alone, according to Good Call public relations manager Carrie Wiley, who spoke with Law.com. “In large cities where salaries are high, the cost of living is also high,” she said.

Good Call used information from the U.S. Bureau of Labor Statistics to compare lawyer salaries in nearly 800 metropolitan areas with average salaries in those same areas. Good Call also considered: job availability based on listings at Indeed.com; average housing prices compared to average lawyer salary; and the number or arts, entertainment and restaurant venues in the area based on census data from business owners.

6) Brownsville and Harlingen area of Texas

10) South Bend and Mishawaka region in Indiana and Michigan

Law.com spoke with critics who questioned whether Good Call used the right data to determine the best cities for law practice. Legal statistics blogger Matt Leichter said the better comparison is between after-tax salaries for lawyers and living costs in the area where they want to practice. And Kyle McEntee, executive director of Law School Transparency, questioned whether economically depressed areas that made the list would be a lucrative place to practice law.

The full list of the top 100 places for new law grads is available here.