So You Want to Write a Novel? Legal Training Is a Plus, Legal Author Tells ABA Audience 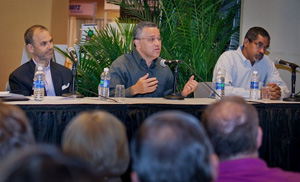 Yale law professor and author Stephen Carter is often asked why so many lawyers write fiction, particularly thrillers and mysteries. He has a ready answer: It’s the Socratic method.

“That process, which virtually every law student despises, gets us to begin thinking about the ‘what ifs,’ ” Carter said at an ABA Annual Meeting program on Saturday. Students taught to consider the contingencies can translate that ability to fiction writing, developing twists and turns that stay a step ahead of the reader, Carter observed. He has put his own legal skills to use in his latest book, The Impeachment of Abraham Lincoln, which imagines an alternate world in which the president survives an assassin’s bullet.

Carter appeared along with two other high-profile writers with legal backgrounds: legal thriller author Scott Turow and journalist Jeffrey Toobin, author of a nonfiction book about the U.S. Supreme Court titled The Nine. The program was called “The Law as a Platform for Writing.”

All the authors draw on skills taught in law school, along with discipline and a strong desire to write. Carter sees a link between legal training to ferret out the important facts and the ability to develop narrative when writing. Research is also important, even in fiction, the authors agreed.

“Knowing the facts tends to feed my imagination,” Turow explained and then provided an example: Is it possible to distinguish the DNA of identical twins? The answer, he told the audience, plays a part in the new novel he is writing.

The authors also discussed how they manage to write while handling other responsibilities. When Toobin is working on a book, he takes a leave from his job at the New Yorker and writes 1,250 words a day, the equivalent of five double-spaced pages. Turow works part-time at SNR Denton to allow time for writing, while Carter offered that he manages by sleeping only part-time.

Ability, of course, is another requirement. Nonfiction writer Toobin learned that lesson himself when he decided in the summer of 2005 that he would try his hand at fiction. The book would be a thriller about a murdered on-air journalist. He sent the first three chapters to his editor, who had bad news. It was terrible. She had another suggestion: Why not write a book about the U.S. Supreme Court?