Socrates retrial: Did he have to drink the hemlock? 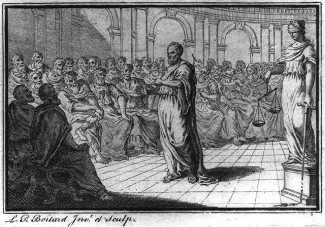 Library of Congress image from “The Life of Socrates”
London, 1750

Twenty-four centuries after he was convicted in one of the most famous trials in history, the ancient Greek philosopher and teacher Socrates is still guilty. But at least this time around, he wouldn’t have to down that fatal cup of hemlock.

That was the consensus, at least, of an audience numbering some 900 people that packed a ballroom at Chicago’s downtown Palmer House hotel on Thursday evening to hear four of Chicago’s most illustrious trial lawyers argue the case before voting on the fate of Socrates. The event was sponsored by the National Hellenic Museum in Chicago.

The actual trial of Socrates in 399 B.C. took place in an Athens that, just five years after a devastating defeat by Sparta in the Peloponnesian War, was uneasy about its internal stability and uncertain about its future. The city-state’s democratic structures were being challenged from within by groups seeking to impose an oligarchy.

Socrates was 70 when he was charged by three fellow citizens with religious impiety and corrupting the youth of Athens with his political ideas, which some viewed as challenges to the governing structure, even though he had acted as something of a political gadfly for half a century. Athenian law did not provide for prosecutions by the state, so Socrates and his accusers presented their own arguments before a jury of 500 citizens, who cast their votes for conviction or acquittal by dropping specially marked disks into jars. The jury convicted Socrates, then voted for the death penalty over his argument that he should receive no punishment at all. Rather than flee the city, he drank a cup of poisonous hemlock while surrounded by friends.

Efforts were made in Thursday’s retrial to replicate the trial procedures of ancient Athens, but it was difficult for the lawyers and the audience not to look at the case through the prism of the 21st century A.D. One of the prosecutors, Patrick J. Fitzgerald, acknowledged that difficulty when he said, “How do we know history got it wrong? We need to give the Athenians their fair due.” Fitzgerald, the former U.S. attorney for the Northern District of Illinois, is a partner at Skadden, Arps, Slate Meagher & Flom.

The other prosecutor, Patrick M. Collins, struck the same theme when he told the audience, “Do not judge the society of Athens; judge whether he committed these offenses.” Collins, who worked for Fitzgerald as an assistant U.S. attorney, is a partner at Perkins Coie in Chicago.

At the same time, Thursday’s program showed how issues from the original trial of Socrates still resonate today. “Some are fearful that Athens no longer can tolerate anyone like Socrates who would dare suggest that we can improve democracy or that our young people can think for themselves,” said defense counsel Dan K. Webb, who preceded Fitzgerald as U.S. attorney in Chicago and who now is a partner at Winston & Strawn. “These accusers want to abolish free speech, and these charges have put free speech on trial.”

Webb’s co-counsel, Robert A. Clifford, said, “You may not like what he had to say, but these accusations come from fear-mongers, and fear-mongering is never good for ‘we the people.’ ” Clifford is founding partner of Clifford Law Offices in Chicago and a past chair of the ABA Section of Litigation.

When it came time to reach a verdict, the audience followed the example of the ancient Athenian jury by using disks to cast their votes—but these were plastic. When the disks—white for acquittal, blue for conviction—were dumped into scales of justice at the front of the room, conviction clearly carried more weight. It is not known how many votes to convict were cast by lawyers finally striking back against the miseries they endured in law school while acclimating to the Socratic Method.

A three-judge “court” agreed with the verdict in a 2-1 vote, with only Richard A. Posner, a judge on the 7th U.S. Circuit Court of Appeals in Chicago, dissenting. Meanwhile, a celebrity panel of jurors reached a 7-7 deadlock.

But when it came time to sentence Socrates, the judges and jury relented. No death penalty. No cup of hemlock. Just a slap on the wrist. After Judge Anna H. Demacopoulos of the Cook County Circuit Court suggested a fine of 3,000 silver drachmas (a coin used in ancient Greece), her fellow court member, Judge William J. Bauer of the 7th Circuit, closed the proceedings in a way that any denizen of Chicago’s courts would understand. “I don’t know the value of a drachma,” said Bauer, “but I’d fine him two bucks and let him go.”