Most countries have largely discontinued solitary confinement, but not the United States, where the number of inmates in solitary could fill MetLife Stadium, the site of the Super Bowl.

Solitary confinement is increasingly routine in the United States, though scientists say it harms mental health and doesn’t help rehabilitation, the Smithsonian reports.

Scientists discussed the harms recently at a Chicago meeting of the American Association for the Advancement of Science, the story says. University of California at Santa Cruz psychologist Craig Haney and his colleagues have surveyed about 500 inmates in solitary. A majority had symptoms such as dizziness, heart palpitations and depression, 41 percent had hallucinations, and 27 percent had suicidal thoughts. The general prison population has significantly lower levels of those problems. 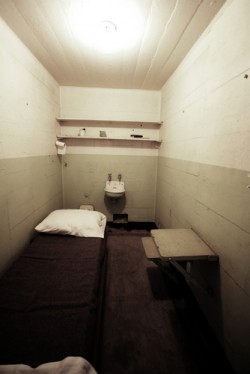 People denied contact with others “begin to lose a sense of self, of their own identity,” Haney said. “They begin to withdraw from the little amount of social contact that they are allowed to have, because social stimulation, over time, becomes anxiety-arousing.”

Meanwhile, a separate study has found that inmates in solitary confinement at New York City jails were about seven times more likely to try to kill or harm themselves than the general jail population, the Associated Press reports. The study controlled for characteristics such as length of jail stay, race and serious mental illness.

Many of the New York City inmates harmed themselves in an effort to stay out of solitary, the study found.

At the Chicago meeting of scientists, former Louisiana inmate Robert King, whose murder conviction was eventually overturned, told how 29 years in isolation affected him. Being confined to a small space has made it more difficult to navigate bigger areas, he said, and also affected his eyesight, according to the Smithsonian account.

“I lost the ability to meet with a broader terrain. I had become acclimated to shorter distances,” he said. “I cannot, even to this day, acclimate myself to broader distance. My geography is really shot.” He also said he became nearly blind in solitary, but his eyesight has improved since his release.

Rick Raemisch, the executive director of Colorado’s prison system, recently spent a night in solitary confinement to learn more about it. He was appointed to his position after Colorado’s former prison director was killed by a man recently released from solitary. Raemisch wrote about his experience for the New York Times.

Inmates in Colorado’s solitary confinement can’t have personal property such as books or televisions. Sleeping is often interrupted by noise and prisoner counts. Many of the inmates there are mentally ill. Raemisch’s predecessor had cut the use of solitary, but Raemisch says more reforms are needed.

“By placing a difficult offender in isolation you have not solved the problem,” he writes, “only delayed or more likely exacerbated it, not only for the prison, but ultimately for the public. Our job in corrections is to protect the community, not to release people who are worse than they were when they came in.”