Some Firms Housing Busy Lawyers On Site in Sleeping Pods 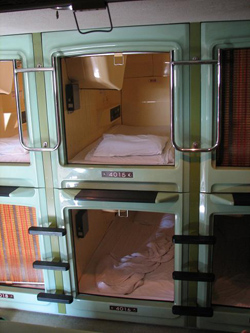 Photo of the Asakusa Capsule Hotel
in Japan, by Ryan McDonald.

Lawyers working night and day on big corporate cases in London have little time for personal routines, including going home for a good night’s rest or a few minutes of shuteye.

Instead, many are taking up residence in rooms at their firms, some of them reportedly in the style of Japanese capsule hotels, the Guardian reports in a story about the increasing pressures placed on big firm lawyers.

But the rooms, which according to the Guardian “evoke unhappy memories of boarding school,” aren’t very popular.

“Most lawyers prefer the alternative of a strong cup of coffee, sometimes rounded off with a few early morning pints among the meat workers at the pubs near Smithfield market,” the publication reports.

Unless of course, lawyers have been working day after day without a break. Then these temporary accommodations apparently book pretty quickly.

One former magic circle lawyer recounted a particularly busy work period: “One Sunday morning as I was eating breakfast I got a call from my boss asking me to come in immediately. I worked that day until 1 a.m., then went home for some sleep. I was back in at 7 a.m. on Monday, working through until 6 a.m. on Tuesday. At that point I got three hours’ sleep at the office, before starting work again at midday and continuing right through until 7 a.m. on Wednesday—when, thank God, the deal closed.”

The Guardian piece goes on to cite evidence that sleep deprivation leads to risky decision-making and a tendency to overestimate performance. Not to mention it’s a big contributing factor to law firm turnover and high attrition rates, especially for women.

Much of the pressure can be attributed to client demand. But the Guardian cites an April blog post at The People’s Therapist. Blogger Will Meyerhofer, a former Sullivan & Cromwell lawyer who now works as a psychotherapist, blames “machismo.”

He writes, “There’s a machismo around staying up all night, night after night—like doing 10 shots of tequila. You’re tough. Not a problem.”