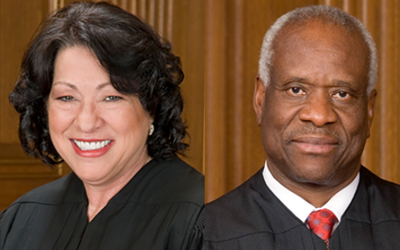 U.S. Supreme Court Justice Sonia Sotomayor singled out her ideological opposite, Justice Clarence Thomas, for praise during remarks to the American Constitution Society on Thursday.

Sotomayor didn’t address the leak of a draft opinion overturning Roe v. Wade, the New York Times reports. Nor did she talk about the controversy surrounding Thomas’ wife, Virginia “Ginni” Thomas, who has said she is eager to speak with the House committee investigating the the Jan. 6, 2021, U.S. Capitol riot after reports of her support for overturning the 2020 presidential election.

But Sotomayor did address the need “to have continuing faith in the court system and our system of government,” according to the New York Times.

Reuters, Law360 and CNN also have stories, while How Appealing links to additional coverage here and here.

According to Reuters, Sotomayor described Thomas as “a man who cares deeply about the court as an institution” and the people who work there. He is the one justice in the building, she said, who “literally knows every employee’s name.”

Sotomayor said she suspects that she has disagreed with Thomas more than any other justice, but they share a common understanding about kindness toward people.

“That’s why I can be friends with him and still continue our daily battle over our difference of opinions in cases,” she said.

Sotomayor acknowledged that there are days when she gets discouraged.

“Every time I do that, I lick my wounds for a while, sometimes I cry, and then I say: ‘Let’s fight,’” she said.