Sotomayor: I wanted to be a cop, but learned from 'Perry Mason' that I could be a lawyer 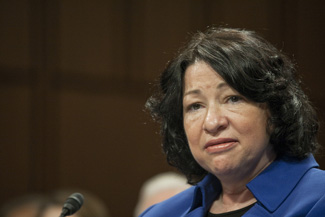 As Sonia Sotomayor was growing up in a housing project in the Bronx, she wanted to become a police officer.

But after a childhood diabetes diagnosis made that career an impossible dream for her, she realized, watching Perry Mason on television, that an alternative career as a lawyer had similar appeal, the U.S. Supreme Court justice, now 58, told 60 Minutes in a wide-ranging interview that was broadcast Sunday. CBS News provides a transcript.

By age 10, she had decided she wanted to be not only a lawyer but a judge, Sotomayor said. She credited her own stubborn streak and her mother, Celina, a single parent after Sotomayor’s father died “from drinking” when she was 9, for her extraordinary success in life.

Despite prior experience as a prosecutor and a federal appellate judge, Sotomayor used the phrase “overwhelmingly terrifying” to describe to interviewer Scott Pelley how she felt when she first took the bench on the nation’s top court.

“I was so anxiety-ridden. I was so nervous that day that my knees knocked,” she said. “And I thought everybody in the courtroom could hear them knocking.”