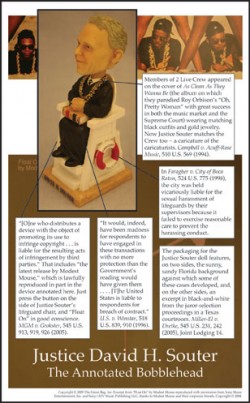 Because it’s April 1, we did some double-checking. But we have confirmation that the David H. Souter Bobblehead has been released today.

The kitschy doll, created by The Green Bag law review, comes complete with bling and audio. We can see from the fine print on the bobblehead promo sheet that the tune is “Float On” from Modest Mouse. Don’t remember that one? Check it out on YouTube. Souter referenced the song in a 2005 decision, MGM v. Grokster.

Tony Mauro, in a Blog of Legal Times post, reports that the Souter doll was delivered to the justice today.

Mauro notes that the doll has taken the bobblehead “art form to a new level.”

“As with the previous five dolls of sitting justices, Souter’s is rich with iconography devised by Green Bag’s editor in chief Ross Davies, a law professor at George Mason University,” Mauro writes. “Every facet of the doll has meaning, drawn from the justice’s jurisprudence or personal history.”

Distribution of the dolls is limited to Green Bag subscribers.