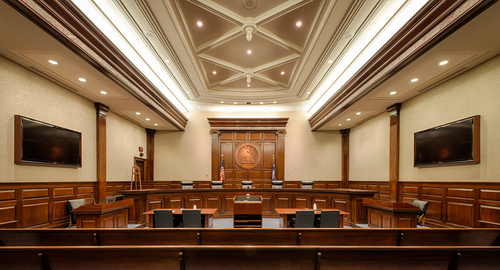 Thousands of arrest warrants from lower-level judges are being suspended in South Carolina as a result of instructions by the state's chief justice.

Chief Justice Donald Beatty told the summary court judges in a Sept. 15 memo that defendants must be advised of a right to a lawyer, and poor defendants must be provided with a lawyer before they can be jailed, report the Post and Courier and WISTV.com. He also said defendants could not be jailed for missing trial if they hadn’t been informed of their rights.

Beatty provided additional information on Nov. 1 at a mandatory training session for the judges. Defendants who don’t show up for trial can’t be convicted unless prosecutors present evidence, he said.

Those instructions have led many summary courts to suspend arrests as they figure out which cases are affected by Beatty’s instructions, the Post and Courier reports.

In the past, people in South Carolina who didn’t pay fines or didn’t show up for trial on certain misdemeanors or traffic tickets were arrested and jailed, sometimes until their tickets were paid. New York magazine noted the practice and said it had the effect of intimidating poor people into paying their fines.

Those practices have been targeted by the American Civil Liberties Union. In a class action lawsuit filed in October, the ACLU alleged that the state’s municipal courts fail to provide lawyers to people who can’t afford them and fail to advise defendants of their right to a lawyer. In a June lawsuit, the ACLU claimed a South Carolina county is operating a debtors’ prison by jailing people who can’t pay court fines, according to a June story by Courthouse News Service.

Charleston County Chief Magistrate Leroy Linen told the Post and Courier that he has changed practices in his courts. Now, Linen said, people who fail to pay fines or who are convicted at a no-show trial will get letters telling them how to pay. If they don’t respond, a warrant can be issued, but the defendants will be brought before a magistrate rather than sent to jail for a lengthy period.

Story updated on Nov. 13 to include report on the ACLU’s debtors’ prisons lawsuit.