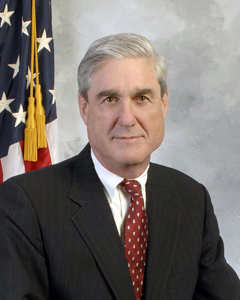 The defendants are accused of using “information warfare” to sow discord and influence the election by creating fake personas on social media and staging rallies.

There is no allegation in the indictment that the conduct altered the outcome of the election, nor is there any allegation that any American was a knowing participant in the attempt to influence the election, according to a Department of Justice press release.

The indictment says that some of the defendants “communicated with unwitting individuals associated with the Trump campaign” and with political activists without revealing their association with Russia. ABC News, the Washington Post, the New York Times, Politico and CNBC have stories.

Trump responded to the indictment in a tweet highlighting that the election wasn’t affected. “The Trump campaign did nothing wrong—no collusion!” he tweeted.

Charges include conspiracy to defraud the United States, conspiracy to commit wire fraud and bank fraud, and aggravated identity theft.

The Internet Research Agency was named in the indictment. The Post describes the group as “a notorious Russian troll farm.”

Two other groups named in the indictment are accused of helping finance the operation of the Internet Research Agency. Twelve individuals worked for the agency, and another operated the companies offering financial backing.

The Internet Research Agency “had a strategic goal: to sow discord in the U.S. political system, including the 2016 presidential election,” the indictment says. “Defendants posted derogatory information about a number of candidates, and by early to mid-2016, defendants’ operations included supporting the presidential campaign of then-candidate Donald J. Trump.”

The defendants also supported Sen. Bernie Sanders, I-Vt., while denigrating Hillary Clinton and GOP candidates such as Sen. Marco Rubio, R-Fla., and Sen. Ted Cruz, R-Texas, according to the indictment. The defendants are also accused of urging minority groups not to vote in the election or to support a third-party candidate.

The defendants are also accused of promoting allegations of voter fraud by the Democratic Party.

The defendants bought political ads on social media in the names of U.S. people and entities, and staged political rallies in the United States while posing as U.S. people and grassroots organizations, the indictment says. After the election, the defendants staged rallies to support and oppose the president.

The defendants violated regulations regarding disclosure of election expenditures, failed to register as foreign agents, obtained visas through false statements, and conspired to obstruct the lawful functions of the U.S. government, prosecutors alleged.

The Times says the defendants are unlikely to face immediate arrests, but the indictment will make international travel difficult.

Russia started their anti-US campaign in 2014, long before I announced that I would run for President. The results of the election were not impacted. The Trump campaign did nothing wrong - no collusion!

Updated at 2:45 p.m. with new fifth paragraph and to include Trump’s tweet; recasted headline on Feb. 20.