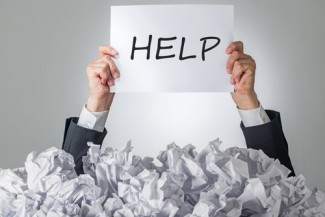 A litigant that squeezed multiple words together and resorted to abbreviations didn’t satisfy word limits in its briefs and won’t be able to pursue its appeal, according to the U.S. Court of Appeals for the Federal Circuit.

The appeals court tossed the patent appeal by Pi-Net International in an April 20 order (PDF). How Appealing links to the opinion and a story by Law360 (sub. req.), which dubbed the creative wording “a trick straight out of high school English class.” The Am Law Litigation Daily (sub. req.) also has coverage.

The patent suit by inventor Lakshmi Arunachalam and her company Pi-Net had contended JPMorgan Chase’s online banking operations violated their patents. A federal judge in Delaware invalidated the patents in May 2014 and granted summary judgment to JPMorgan.

On appeal, JPMorgan objected to Pi-Net’s first brief, saying it attempted to evade the 14,000 word limit by deleting spaces between various words and squeezing them together, according to the Federal Circuit. The Federal Circuit offered an example: One case citation consists of 14 words, but Pi-Net squeezed them together to make them into one word.

Pi-Net’s corrected brief (PDF) tried another tack: replacing various phrases and case citations with abbreviations, and then listing the citations only in the table of authorities. Other abbreviations such as “CR1” are used to cross-reference something stated earlier in the brief, “although, it is so poorly explained that it is nearly incomprehensible,” the Federal Circuit said.

The brief also omits articles such as “the” and “a.” The statement of facts begins this way: “Judge Andrews, after two years, transferred case to Judge Robinson. Markman conducted a week later. DDC ruled. Two days later, Notice of Appeal filed, against client instructions. Judges failed to recuse despite financial and relationship conflicts of interest. 60(d)(3) Motion is pending in DDC.”

A prior decision in the case by a federal district judge said Arunachalam had “clashed with multiple well-respected attorneys,” according to prior coverage by the Delaware Law Journal (sub. req.). Arunachalam and Pi-Net have sued more than 80 defendants since 2012 over patents for online transactions, according to the Am Law Daily.

The lawyer representing Pi-Net in the appeal, William Weidner of the Bell Law Firm in Wilsonville, Oregon, declined to comment. Arunachalam issued a statement criticizing the Federal Circuit and denying that the brief exceeded exceeded word limits, according to the Am Law LItigation Daily. The statement also pointed to a table in the second brief that defined the abbreviations.