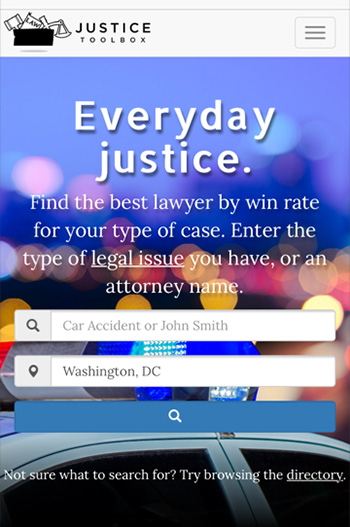 A startup company formed by a former Covington & Burling lawyer aims to help consumers choose lawyers through a free website that compiles the lawyers’ approximate win rates in state courts.

The startup, Justice Toolbox, currently offers data only for Washington, D.C., and Maryland, according to LawSites by Robert Ambrogi. Additional cities are expected to be added by June. A press release is here.

The website’s creator is Bryant Lee, who is a computer scientist as well as a lawyer. He was inspired to create the website when he was at Covington and lawyers at the firm would send out emails asking for recommendations on lawyers who could handle everyday issues. The emails made Lee realize that even lawyers need help finding lawyers.

The listing for the lawyer showed the names of his most recent cases, along with the dates they were filed and the “estimated result,” such as a win, a settlement or a transfer. A few of the results were listed as “unknown.”

Ambrogi has noted a few problems with rating lawyers by win rates. Since most cases never go to trial, the win rate reflects only a small part of a lawyer’s work. And in some cases, a loss may still be a victory for a client who faced larger exposure.

“At the same time, I can see value in providing consumers with more information on which to evaluate a potential lawyer,” Ambrogi writes. “I would just hope that consumers do not rely exclusively on these rankings and understand that it’s often not whether the lawyer won or lost, but how she played the game.”