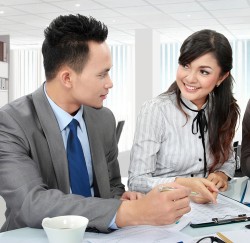 “Strategic flirtation” is more common at law firms with stereotypical masculine cultures that emphasize competition, ambition and assertiveness, according to a survey of 281 female lawyers.

The more masculine the culture, the more strategic flirting takes place, the study found. Yet, masculine cultures were less forgiving of flirts than feminine cultures. The Washington Post, Business News Daily and Quartz have stories.

“Bottom line from the research: Flirting at work—even if it’s more common in some cultures—isn’t such a good idea,” the Post says. “But you probably didn’t need a study to tell you that.”

The survey respondents, who worked at 38 law firms in the southeastern United States, were asked how often they engaged in “socio-sexual” behaviors to get ahead with questions such as “I smile flirtatiously at certain men at work” or “I sometimes try to play dumb or act like I need help from a male at work.” The lawyers were also asked to describe firm culture.

Researchers judged firms to be “masculine” if they had cultures described as aggressive, competitive, ambitious or risk-taking. “Feminine” firms, on the other hand, had a work environment described as sensitive, loyal, warm and empathetic.

The results are being presented this week at the Academy of Management Conference in Orlando. One of the study co-authors is Oklahoma State University management professor Alexis Smith.

Masculine environments expose women who do flirt “to a lot of hurtful slights, like being treated rudely or as if they were stupid or being excluded from meetings,” Smith told Business News Daily.

Another study co-author, University of Utah business ethics professor Arthur Brief, told Quartz that previous research has found that those who “who engage in sexual displays to get ahead” earn less and receive fewer promotions.