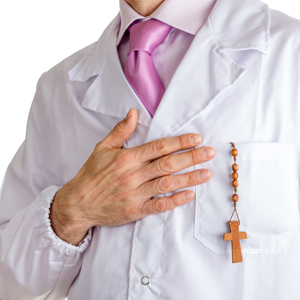 A New Jersey transgender man claims in a lawsuit that a Catholic hospital violated state and federal law when it refused to allow a surgeon to perform a hysterectomy on him.

The suit (PDF) filed Thursday on behalf of Jionni Conforti by Lambda Legal claims violations of the New Jersey Law Against Discrimination and the Affordable Care Act, according to a press release. The Washington Post and the Associated Press have stories.

The Affordable Care Act bars discrimination on the basis of sex at health facilities that receive federal assistance. Federal regulations that had been scheduled to take effect on Jan. 1 interpreted that wording to bar health-care discrimination on the basis of gender identity. The New Jersey bias law protects access to public accommodations without regard to “sex, gender identity or expression.”

The federal regulation—which also defined sex bias as discrimination based on the termination of a pregnancy—has not been implemented as a result of a nationwide injunction issued on Dec. 31 by a federal judge, according to coverage by BuzzFeed and Reuters. The plaintiffs, which included eight states and religiously affiliated medical groups, had alleged violations of religious freedoms guaranteed by federal law, and of the law governing federal rule-making.

Conforti’s doctor had determined that a hysterectomy was medically necessary to treat Conforti’s gender dysphoria and because his hormone treatment put him at increased risk for reproductive cancers. Personnel at St. Joseph’s Regional Medical Center originally confirmed he could have the surgery, but the operation was canceled by the director of mission services at the hospital, according to the lawsuit.

The director told Conforti in an email that “as a Catholic hospital we would not be able to allow your surgeon to schedule this surgery here.”

According to the Ethical and Religious Directives for Catholic Health Care Services, which are issued by the U.S. Conference of Catholic Bishops, “[d]irect sterilization of either men or women, whether permanent or temporary, is not permitted in a Catholic health care institution. Procedures that induce sterility are permitted when their direct effect is the cure or alleviation of a present and serious pathology and a simpler treatment is not available.”

Conforti told the Associated Press he eventually found a hospital to perform the surgery, but his experience at St. Joseph’s left him feeling “completely disrespected as a person.”

“That’s not how any hospital should treat any person regardless of who they are,” he told AP. “A hospital is a place where you should feel safe and taken care of. Instead I felt like I was rejected and humiliated.”