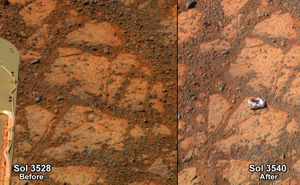 The author of a book on alien life is asking a judge to compel NASA to take a closer look at the unusual Mars rock that is said to look like a jelly doughnut.

Rhawn Joseph identifies himself as an astrobiologist in the petition for a writ of mandamus filed on Monday in San Francisco federal court, report Popular Science and Courthouse News Service. In his pro se complaint, Joseph calls the rock a “putative biological organism.”

The rock has attracted attention because when the Mars Rover took pictures of the same patch of land 13 days earlier, it was not there, according to NASA when it posted the photo. “One of its wheels likely knocked the rock–dubbed ‘Pinnacle Island’–to this position,” the caption explained.

NASA’s refusal to take close-up photos of the so-called rock, along with its refusal to release high-resolution photos, “is inexplicable, recklessly negligent, and bizarre,” the suit says. Joseph suggests the rock is actually a “mushroom-like fungus” that germinated from spores.

“Any intelligent adult, adolescent, child, chimpanzee, monkey, dog, or rodent with even a modicum of curiosity, would approach, investigate and closely examine a bowl-shaped structure which appears just a few feet in front of them when 12 days earlier they hadn’t noticed it,” the suit says.