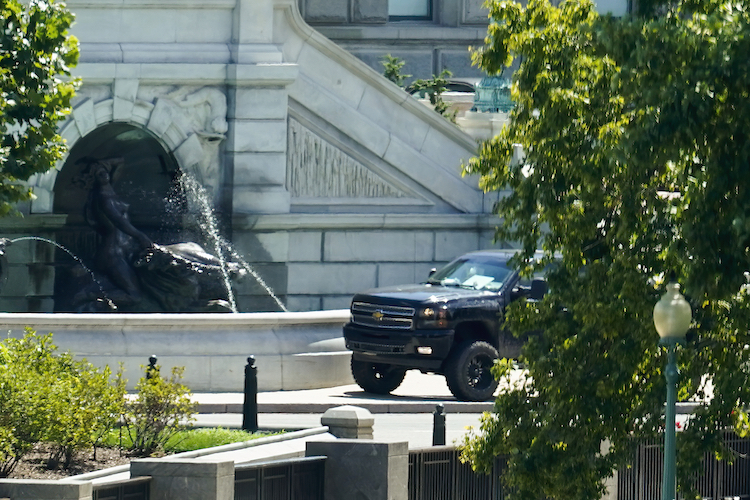 A black pickup truck is parked on the sidewalk in front of the Library of Congress’ Thomas Jefferson Building, as seen from a window of the U.S. Capitol on Thursday in Washington, D.C. Photo by Alex Brandon/The Associated Press.

Updated: U.S. Capitol police on Thursday morning were urging people to stay away from the area near the Library of Congress as they conducted an “active bomb threat investigation.”

The U.S. Supreme Court was among the buildings that were evacuated. Other buildings evacuated were the Library of Congress; the Cannon, Jefferson and Madison office buildings; and an office for the Republican National Committee, according to the New York Times, the Washington Post, Politico and CNBC.

Authorities were negotiating with a man in a black pickup truck parked outside the Library of Congress. The man said he had a bomb, and he appeared to have a detonator in his hand, according to Capitol Police Chief J. Thomas Manger, who spoke at a news conference.

Police were unsure whether the man actually had explosives in the truck.

“We’re trying to get as much information as we can to try to find a way to peacefully resolve this,” Manger said.

The man surrendered without incident on Thursday afternoon, according to the New York Times, CNN and the Washington Post.

Updated Aug. 19 at 1:55 p.m. to include additional details of the investigation.