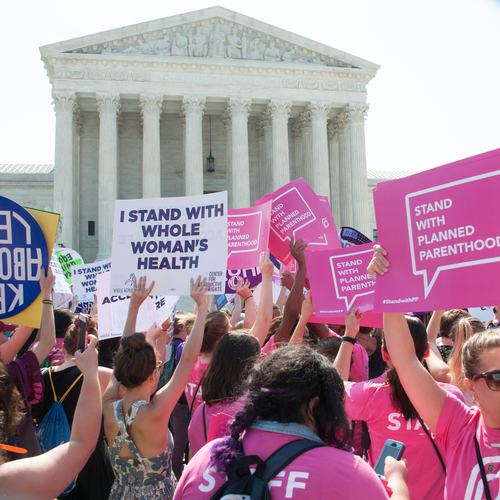 The U.S. Supreme Court on Monday overturned two provisions of a Texas law regulating abortion clinics in a 5-3 decision, finding they place an undue burden on access to abortion.

The 2013 Texas law, known as House Bill 2, required physicians performing abortions to have admission privileges at a hospital within 30 miles. It also required abortion facilities to comply with hospital-style standards for ambulatory surgical centers.

“We conclude that neither of these provisions offers medical benefits sufficient to justify the burdens upon access that each imposes,” Breyer wrote. “Each places a substantial obstacle in the path of women seeking a previability abortion, each constitutes an undue burden on abortion access, … and each violates the federal Constitution.”

In a concurrence, Justice Ruth Bader Ginsburg said that many medical procedures, including childbirth, are far more dangerous than abortions, yet they are not subject to either requirement. “Given those realities,” Ginsburg said, “it is beyond rational belief that H. B. 2 could genuinely protect the health of women, and certain that the law ‘would simply make it more difficult for them to obtain abortions,’ ” she wrote, citing from a different case.

“When a state severely limits access to safe and legal procedures, women in desperate circumstances may resort to unlicensed rogue practitioners, faute de mieux, at great risk to their health and safety,” Ginsburg said.

The Supreme Court opinion overturns a decision by the New Orleans-based 5th U.S. Circuit Court of Appeals, which upheld both regulations except as applied to an abortion clinic in McAllen. Breyer said the appeals court standard for determining undue burden was too lenient. The relevant statute made no legislative findings, and the district court was correct when it considered factual evidence as it weighed asserted benefits of the law against the burdens, Breyer said.

Turning to the admission-privileges requirement, Breyer said “there was no significant health-related problem that the new law helped to cure.” The prior law had required abortion doctors to have a “working” relationship with a doctor who had admission privileges, and the evidence showed no benefit to the new requirement. At oral argument, the lawyer representing Texas could not cite one instance in which the tougher admission-privileges requirement helped one woman obtain better treatment, Breyer noted.

Breyer’s opinion also cited an amicus brief that said hospitals often condition admission privileges on a certain number of admissions each year. Because abortions are so safe, abortion providers were unlikely to have any patients to admit, Breyer said.

Turning to the surgical-center requirement, Breyer said it included detailed specifications for the size of the nursing staff, building dimensions, and building regulations that included requirements for a full surgical suite. The costs of compliance were expected to range from $1 million to $3 million per facility.

The effect of the requirement is that patients will be required to travel long distances for abortions in “crammed-to-capacity superfacilities,” even though prior safety regulations for abortion clinics posed no threat to women’s health, Breyer said.

Patients traveling to superfacilities “are less likely to get the kind of individualized attention, serious conversation, and emotional support that doctors at less taxed facilities may have offered,” Breyer said. “Healthcare facilities and medical professionals are not fungible commodities. Surgical centers attempting to accommodate sudden, vastly increased demand, … may find that quality of care declines.”

The Supreme Court struck down the provisions after finding that the constitutional claims could be raised despite a prior lawsuit challenging the admission privileges requirement. The claims were not barred by the doctrines of res judicata or issue preclusion, he said.

Breyer cited the Restatement of Judgments, which says that when important human values are at stake, a slight change of circumstances be be sufficient to allow a second lawsuit. The second challenge to the abortion regulations, Breyer said, “rests in significant part upon later, concrete factual developments” that occurred after enforcement of the admissions-privilege requirement—the closings of a large number of abortion clinics.

Breyer also said the plaintiffs were not required to challenge the surgical-center requirement in the first lawsuit. “This court has never suggested that challenges to two different statutory provisions that serve two different functions must be brought in a single suit,” Breyer said.

A dissent by Thomas said the court “creates an abortion exception to ordinary rules of res judicata, ignores compelling evidence that Texas’ law imposes no unconstitutional burden, and disregards basic principles of the severability doctrine. I write separately to emphasize how today’s decision perpetuates the court’s habit of applying different rules to different constitutional rights—especially the putative right to abortion.”

Alito wrote a separate dissent, joined by Thomas and Roberts. He said the court had misapplied the law of res judicata. “Determined to strike down two provisions of a new Texas abortion statute in all of their applications,” Alito wrote, “the court simply disregards basic rules that apply in all other cases.”

ABAJournal.com: “Chemerinsky: What will Scalia’s absence mean for current cases?”