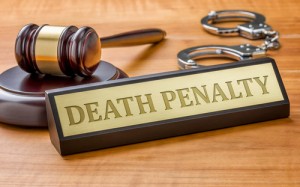 The U.S. Supreme Court has rejected an Eighth Amendment claim by Oklahoma death-row inmates who challenged the use of the sedative midazolam in executions.

The court ruled 5-4 (PDF) that the inmates failed to establish that the use of midazolam violates the Eighth Amendment. The inmates had argued the drug created an unacceptable risk of severe pain, and its use amounted to cruel and unusual punishment. Justice Samuel A. Alito Jr. wrote the majority opinion.

A dissent by Justice Stephen G. Breyer, joined by Justice Ruth Bader Ginsburg, called for briefing on whether the death penalty itself is constitutional.

“Rather than try to patch up the death penalty’s legal wounds one at a time,” Breyer wrote, “I would ask for full briefing on a more basic question: whether the death penalty violates the Constitution.”

“I believe it highly likely that the death penalty violates the Eighth Amendment,” Breyer said.

Alito cited two reasons why the court upheld the use of midazolam.

First, Alito said, the death-row inmates “failed to identify a known and available alternative method of execution that entails a lesser risk of pain.” Alito said that requirement in Eighth Amendment method-of-execution claims was established in Baze v. Rees, which upheld use of a three-drug lethal injection cocktail.

Second, Alito said, a federal court did not commit clear error when it found the drug didn’t create a substantial risk of severe pain.

Executions using midazolam have attracted negative publicity. At Oklahoma’s first such execution, Clayton Lockett writhed, spoke and bucked for 43 minutes before dying, according to previous coverage. The drug began to be used after death-penalty opponents pressured pharmaceutical companies to stop supply of different drugs—first sodium thiopental and then pentobarbital—for use in executions.

After Lockett’s botched execution, the state determined that an IV line had leaked into surrounding tissue. The state changed its drug protocol to increase the dosage of midazolam and to require a backup IV line.

When the Constitution and the Bill of Rights were adopted, the death penalty was accepted and death sentences were usually carried out by hanging, Alito said in the majority opinion. Since then, the Supreme Court has upheld death by firing squad, electric chair, and the three-drug lethal injection drug protocol.

“Because some risk of pain is inherent in any method of execution, we have held that the Constitution does not require the avoidance of all risk of pain,” Alito wrote. “Holding that the Eighth Amendment demands the elimination of essentially all risk of pain would effectively outlaw the death penalty altogether.”

Justice Sotomayor wrote the principal dissent in an opinion joined by Justices Breyer, Ginsburg and Elena Kagan. Sotomayor argued that the majority “sweeps aside sub­stantial evidence” that the drug cannot keep inmates unconscious during “agonizing stimuli.”

Sotomayor’s dissent asserted that Baze v. Rees did not require identification of a known and available less painful method of execution, despite Alito’s statement to the contrary.

“Petitioners contend that Oklahoma’s current protocol is a barbarous method of punishment—the chemical equiva­lent of being burned alive,” Sotomayor wrote. “But under the court’s new rule, it would not matter whether the state intended to use midazolam, or instead to have petitioners drawn and quartered, slowly tortured to death, or actually burned at the stake: because petitioners failed to prove the availabil­ity of sodium thiopental or pentobarbital, the state could execute them using whatever means it designated.”

Alito responded to Sotomayor’s “drawn and quartered” statement in the majority opinion. “That is simply not true,” Alito said, “and the principal dissent’s resort to this outlandish rhetoric reveals the weakness of its legal arguments.”

“The scene is familiar: Petitioners, sentenced to die for the crimes they committed (including, in the case of one petitioner since put to death, raping and murdering an 11–month-old baby), come before this court asking us to nullify their sentences as ‘cruel and unusual’ under the Eighth Amendment. …

“The response is also familiar: A vocal minority of the court, waving over their heads a ream of the most recent abolitionist studies (a superabundant genre) as though they have discovered the lost folios of Shakespeare, insist that now, at long last, the death penalty must be abolished for good.”

Scalia said the Constitution’s framers disagreed on the death penalty, so they left the matter to the people to decide. “By arrogating to himself the power to overturn that decision, Justice Breyer does not just reject the death penalty, he rejects the Enlightenment,” Scalia wrote. His concurrence was joined by Justice Clarence Thomas.

The case is Glossip v. Gross.

ABAJournal.com: “Chemerinsky: It’s shaping up to be a momentous term for SCOTUS”

ABAJournal.com: “Supreme Court agrees to decide whether sedative can be used in executions”