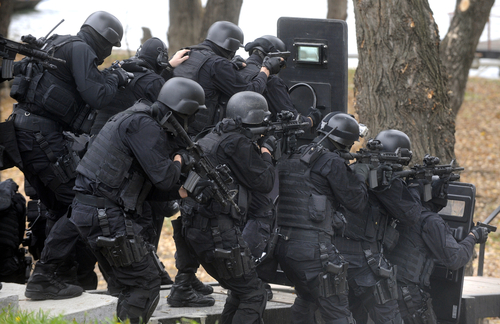 The Los Angeles Police Department was already investigating a series of hoaxes by a man implicated in a so-called swatting incident that led to the December shooting death of a man by police nearly 1,400 miles away in Wichita, Kansas, the Los Angeles Times reports.

Detectives investigated Tyler Barriss’ possible involvement in several false calls and similar hoaxes during the past year, said Deputy Chief Horace Frank, who oversees the department’s counter-terrorism and special operations bureau. They had planned to meet with federal prosecutors to discuss their findings.

“Swatting” is a term for making a false police report, usually of a violent crime, to send SWAT teams or other law enforcement to a location. CNN reports that prosecutors in Southern California filed a warrant on Wednesday with the goal of sending Barriss to Kansas to face a felony false alarm charge.

In May 2016, Barriss was sentenced to two years and eight months in jail after pleading no contest to making a false bomb threat. He was released last January. A day later, he was arrested for violating a protective order and spent another seven months in jail, the Times reports.

Police Sgt. Daniel Suttles of Glendale, California, said Barriss was behind at least two dozen bomb threats in the area in recent years, including ones that led to the evacuations of a television station and an elementary school.

“He knows exactly what to say,” Suttles said. “He knows what a 911 operator will ask and is convincing.”

Citing Dexerto, an online news service with a focus on gaming, NBC News and the Associated Press report that Barriss was allegedly asked by an online gamer to “swat” someone after a dispute over a minor bet during a Call of Duty tournament.

SWAT officers in Kansas believed that they were responding to a scene where a man had called 911 after shooting his father, and that he was holding his wife and young son at gunpoint. In reality, the SWAT team had been given the address of the Finch family, who told local news station KAKE that they had no connection to the video game dispute. An officer shot and killed 28-year-old Andrew Finch on Dec. 28 when Finch came to the door, CNN reports. A Wichita police deputy chief said at a press conference that Finch had moved his hands towards his waistband.

Finch was unarmed, says Andrew Stroth, a civil rights lawyer in Chicago who represents Finch’s family. Stroth criticized police for not dealing properly with the situation.

“Swatting is not new,” Stroth told the Times. “Prank calling is not new. These officers should be equipped to handle these situations.”

The FBI estimates there are approximately 400 cases of swatting annually, and this incident highlights concerns and the need for specific statutory approaches to such crimes.

“The law hasn’t totally caught up to this type of thing, which is obviously not just a prank gone awry but something that is really despicable behavior and diverting … some of our nation’s most important kind of first responders’ assets away from serious crimes and to something else,” Neal Katyal, former acting solicitor general of the U.S. and a professor at the Georgetown University Law Center, said in an interview Tuesday with NPR.

Katyal, who has studied swatting and includes it in his courses at Georgetown, says the cases are “challenging because essentially you have a lack of total intent.” But while the perpetrators likely do not intend the killing, “what they have done, at least arguably, is act with extreme indifference to the value of life.”

Katyal believes that in such a case second-degree murder might apply because “they’ve acted so willfully, with such disregard for the value of life, that we want to treat that not as manslaughter but as murder.”