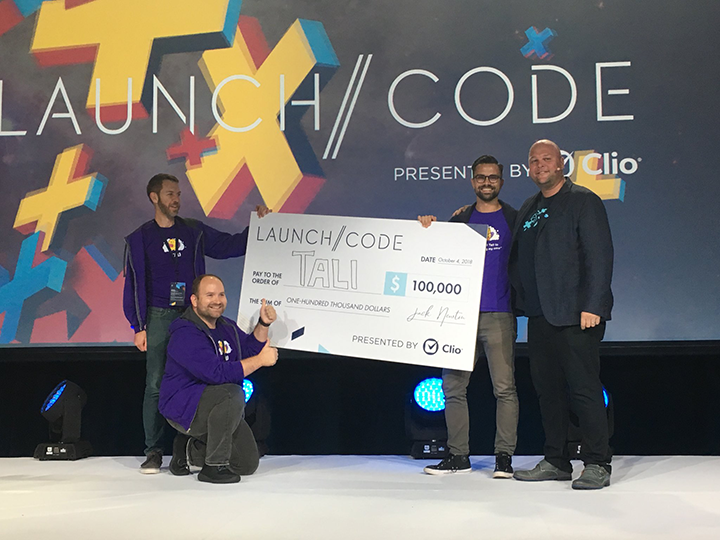 Clio chief executive officer Jack Newton announced the winner during his closing remarks at the 2018 Clio Cloud Conference in New Orleans on Friday. With a stated purpose of identifying the most “creative, powerful and innovative integrations for Clio,” the contest, which was announced at last year’s Clio Cloud Conference, drew over 50 entries.

A panel of four judges chose Tali for its functionality and impact, innovation and user experience. The app allows lawyers to use voice commands to automatically keep track of billable time. Launched in 2017, Tali also works with Amazon Echo and other Alexa-enabled devices, as well as Cortana and Google Assistant.

“The win was being able to pitch on stage in front of a bunch of innovative attorneys,” says Matt Volm, Tali CEO. “Being able to win the prize was icing on the cake.”

Tali was one of five finalists picked to pitch their Clio integration to an audience of conference attendees. The other finalists were ClientSherpa, Logikcull, myFirmData and Your Firm App.

During the pitch competition on Thursday, judge Jules Miller of Prose Ventures called out the lack of gender diversity of the founders on stage. All were men.

In an interview with the ABA Journal, Clio CEO Jack Newton called the comment fair and said that increasing diversity in legal technology is a long-term goal for the company. He noted that, for the first time, a majority of speakers at this year’s conference were women.

He also says that he was pleased with this year’s Launch//Code competition and the new integrations it created. Launch//Code will be held again at next year’s Clio Cloud Conference, this time emanating from San Diego, Calif., with another $100,000 award on the line. Additionally, he says that, in the coming months, Clio will launch an accelerator to help grow the competition, but declined to comment in further detail.

Newton and Miller were joined on the judging panel by attorney Billie Tarascio, a 2018 ABA Journal Legal Rebel, and blogger Bob Ambrogi.