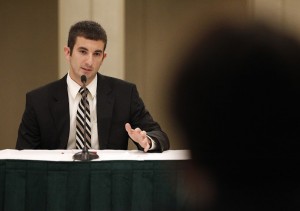 The Task Force on the Future of Legal Education got an earful of reaction Saturday to the findings of the working paper (PDF) it issued earlier this month.

Much of the response was favorable. But all eight of the people who spoke at the task force’s last scheduled public hearing had specific suggestions for things they’d like the task force to include in its final report. Some examples:

• Jared Voskuhl, president and CEO of the National Association of Graduate-Professional Students, endorsed the task force’s recommendation that the ABA undertake an in-depth examination of law school financing and pricing issues. But Voskuhl said the task force should explore in greater depth the federal government’s role in the pricing of a legal education, an issue he said it had touched on only briefly in its working paper.

• Kate Kruse, president of the Clinical Legal Education Association, commended the task force for recognizing that faculty culture drives the curriculum. She also sympathized with the task force for the difficulty of its mission. But she said CLEA believes there are areas the task force can “push a little more,” such as coming up with its own list of core competencies rather than delegating that task to the schools.

• Luke Bierman, associate dean for experiential education at Northeastern University School of Law, said the working paper “goes a long way” towards giving schools the kind of flexibility they need to craft solutions to the problems they face. But he said the task force needs to focus more on technology and place more emphasis on the urgency of the situation.

Kyle McEntee, executive director of Law School Transparency, called the working paper a “tremendous piece of thought leadership” that contains many important recommendations. The big question now, McEntee said, is whether stakeholders will have the will to execute the task force’s vision. “I’m skeptical but I’m optimistic,” he said.

Following the public hearing, the task force met to examine several still-unresolved issues, including the regulation of nonlawyer legal service providers; the law library standards; and the effects of globalization on legal education and the profession.

But not before hearing from Kent Syverud, chair of the council of the ABA Section of Legal Education and Admissions to the Bar, who offered some eye-opening observations of his own. Syverud urged the task force to take a “cheerful and positive tone” in its final report, saying the challenges facing legal education are “mild” compared to those our parents and grandparents faced.

“The future of legal education is bright,” he said. He also pointed out that the accreditation standards are minimum standards, not maximum standards, which “leave incredible leeway for law schools to do innovative things.”

In response to a question about what’s driving the costs of legal education, Syverud said that the focus on particular types of classes or faculty is a “red herring.”

“The painful truth is that the problem with costs is that law professors and deans are paid too much relative to the amount of work they do,” he said. “The whole problem of costs would go away tomorrow if our salaries were halved.”