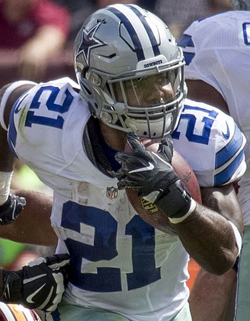 The temporary restraining order—filed by the NFL Players Association and signed by Judge Paul A. Crotty of the U.S. District Court for the Southern District of New York—is good through Oct. 30. That makes Elliott eligible to play Sunday against San Francisco and Oct. 29 at Washington.

According to the Associated Press, Crotty granted the order pending a hearing before Judge Katherine Polk Failla and ordered the NFL to appear before her Oct. 30. Judge Failla is on vacation.

The case moved to New York federal court because the NFL filed there in September to confirm the arbitrator’s decision to uphold Elliott’s suspension, the Dallas Morning News reported. The court is part of the New York City-based 2nd U.S. Circuit Court of Appeals, which last year upheld the NFL’s decision to suspend New England Patriots quarterback Tom Brady for four games over the “Deflategate” scandal, ruling that the collective bargaining agreement between the NFL and the players association gave the NFL broad authority to discipline players.

Elliott was initially suspended by the NFL on Aug. 11 after a yearlong investigation by the league into allegations he had physically abused a former girlfriend in 2016 in Ohio. Elliott has denied the allegations. On Sept. 8, Texas District Court Judge Amos Mazzant called the NFL’s arbitration process for Elliott “fundamentally unfair,” USA Today reported at the time, and issued an injunction blocking the suspension.

On Thursday, the New Orleans-based 5th U.S. Circuit Court of Appeals ruled that the district court lacked subject matter jurisdiction under the Labor Management Relations Act to issue the preliminary injunction and remanded the case to the district court, ordering it to dismiss the case, which it did.

Last season, Elliott set a team record for rookies with a league-leading 1,631 yards.