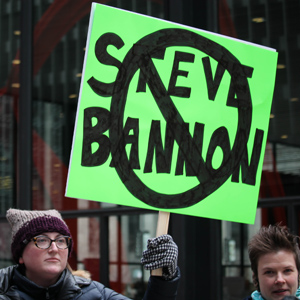 Chicago protesters hold signs opposing the appointment of Stephen Bannon during a march on Nov. 19. Photo by Derek Henkle / Shutterstock.com.

A law professor and a legal marketer apparently struck a chord when they appealed to lawyers disappointed in the election results and with a key appointment by Donald Trump.

Nearly 120,000 people had joined an invitation-only Facebook group called Lawyers of the Left as of Monday morning, Robert Ambrogi reports for Above the Law. More than 10,000 lawyers signed a letter within 48 hours that objected to the appointment of Breitbart News chief Stephen Bannon as chief White House strategist. Above the Law reports on Traci Feit Love, the Harvard law graduate and legal marketer who created the Facebook group, while Bloomberg Big Law Business spoke with a law professor who wrote the protest letter.

Legal marketer Traci Feit Love says her initial goal was to find 150 lawyers to join her Facebook group. Her idea, she wrote, was hatched after she saw Facebook posts from lawyers who proposed positive action after the election. “I thought to myself: Why not create a small Facebook group where those action-minded lawyers could really start making a difference?” Love wrote.

One of the Facebook group’s initial plans is to coordinate among members attending the Women’s March on Washington on the day after the inauguration.

University of Denver law professor Nancy Leong wrote the protest letter with colleagues Lindsey Webb and Robin Walker Sterling. Her goal was to get a couple hundred lawyers to view and repost the letter. More than 10,000 lawyers had signed the letter in less than 48 hours. The letter calls on Congress to ask Trump to rescind Bannon’s appointment.

Leong tells Bloomberg that lawyers across the political spectrum have signed the letter. “It’s not just that people disagree with Stephen Bannon,” she said. “It’s that people from across the political spectrum think he’s unacceptable in a qualitatively different way. It’s a difference of kind, not degree. I think that comes from his alliance with white supremacist causes, and from the alarming statements he’s made over the years about wanting to undermine the government institutions that as lawyers we swore an oath to uphold and to serve and to protect.”

Leong’s letter had 12,000 lawyer signatures when she submitted it to Congress on Friday, TaxProf Blog reports.